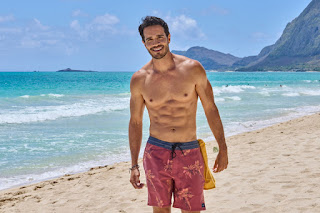 By Markos Papadatos
Senior Writer and "Powerjournalist"
Actor Ektor Rivera starred in Groundswell on the Hallmark channel opposite veteran actress Lacey Chabert. In his Broadway debut, Rivera played Emilio Estefan in On Your Feet! which was performed at the Marquis Theatre in New York City. Rivera's television credits include Fantasy Island, NCIS, and StarUp, among others. His other leading roles in plays and musicals Include Rent, Hairspray, Godspell, High School Musical, Piaf, The Outsiders, and The Mousetrap.
What He Watches
Ektor Rivera loves binge-watching The Sandman on Netflix, as well as Game of Thrones. "Historically, in the romantic comedy department, I love The Notebook, and in the gangster side I love Scarface," he said. "I also enjoy every movie from Latin America, Puerto Rico, and Spain."
His Proudest Moment
Regarding the title of the current chapter of his life, he responded, "Fatherhood."
Aside from acting and being a visual artist, his proudest accomplishment in life is being a father to his baby girl Bria. "Being a father to Bria has taught me to have more of an open heart and it taught me a love that I never thought I would have in my soul. She inspires me to put more soul into everything I do in life," he said.
Right now, he acknowledged that he is watching children's shows and movies because of his daughter.
Where He Draws Inspiration From
On his inspirations in life, he said, "I like to read audiobooks and I learn from every single person. My role models in life are my parents. I appreciate them every day especially since they help mold me into who I am as a human and my values as a family man."
Get to Know Ektor Rivera
He listed the freestyle as his personal favorite stroke in swimming, and the long jump and the relays as his favorite event in track and field.
He revealed that his favorite cheat meal is "pizza."
Waffles or pancakes? Waffles
Flying or driving? DrivingCity living or country living? Country livingSummer or winter? Summer
Library or museum? Museum
Bath or shower? Bath
Pepsi or Coke? Coke
Texting or calling? Texting
Half-full or half-empty? Half-fullCurly fries or normal fries? Normal fries
Skydiving or scuba diving? Scuba diving
Indoor pool or outdoor pool? Outdoor poolTea or coffee? Coffee
Rain or snow? Snow
Singing or dancing? Singing
Burgers or tacos? Tacos
For more information on actor and artist Ektor Rivera:
Follow him on Instagram and check out his Linktree page.
Photo Credit: Crown Media, Karen Neal
Email ThisBlogThis!Share to TwitterShare to FacebookShare to Pinterest
Newer Post Older Post Home