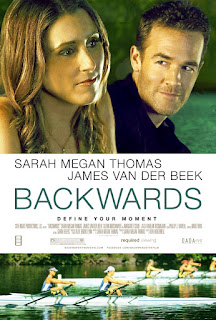 The Olympics will happen. Possibly not as they were intended, but there will most likely be some form of Olympics. If you're looking for a movie to watch on your home TV or other device, and especially if you are a fan of the Olympics or women in sports, Backwards is an inspiring movie relaunched to catch Olympic fever. A story about the world of competitive rowing, it stars the handsome James Van Der Beek (One Tree Hill, Pose, Dancing with the Stars), Sarah Megan Thomas (Equity, Liberte - A Time to Spy), Glen Morshower (Bloodline, The Resident) and  Margaret Colin (Veep, Independence Day). Sarah Megan Thomas wrote and produced the film. Though it is fiction, Sarah was a rower.

The movie is about a young women whose goal in life was to make the Olympic rowing team. After her second unsuccessful attempt, she finds herself accepting a coaching assignement at a small school. During her time with her students and family, she faces the questions of what to do with the rest of her life as what she had trained for for so long was apparently becoming more and more out of reach for her.

This is a good family movie; it's about struggles, determination and setting goals amongst the backdrop of a sport most people know little about. Even though this is about an athlete, it applies to anyone who has created a picture in their mind of what they thought there life would be like. In addition, you'll walk away knowing some crew terminology - and understand the title better!

You can find it now on Amazon and on Itunes here: