Netflix's Secret Obsession: Is the Ending Really a Secret? A Take of Some of Netflix's New Movies 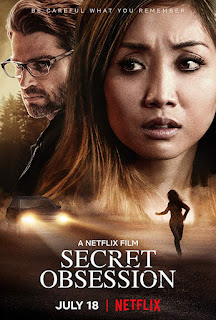 If you've been watching a lot of Netflix movies as I have, you'll see a variety of genres. As far as science fiction goes, I am Mother was great - suspenseful and  thought-provoking. I was at the edge of my seat to the end and appreciated how it ended, wrapped it up nicely and left you thinking. Adam Sandler and Jennifer Anniston's Murder Mystery, well that was the perfect romcom for them, just what their fans wanted to see but frankly I am still confused about the ending, second twist not needed. Still, any fan of theirs will love this movie, and the location shots were a plus. Rebel Wilson's romantic comedy Isn't It Romantic? was just what the doctor ordered, pure romcom fun to satisfy and romcom officianado. But, you will have to be a fan of hers to like this movie because it's a lot about her.

I anxiously watched Secret Obsession. Spoiler here, but honestly you don't need a spoiler. This was more a Lifetime movie. As soon as you watched it you thought something was up with the husband. But, you hoped for a twist. No such twist. And there were so many points in the movie you would be like, 'Why isn't she running?" or "That doesn't make sense." There was also a lot of gore, unnecessary in my eyes, I knew what the killer was doing anyhow. It still kept my watching though.

So Netflix, keep on making movies and I'll keep on watching them. But you can't get them all right.

Click image for review and trailer. If you're a fan, we may also suggest The Mandolorian on Disney + to satisfy your #StarWars cravings.

As a THANK YOU to our readers, we're giving away TEN $20 Gift cards to Amazon or Target in the months the of March. Winners will be announced on April 1, 2020. All you have to do to win is enter your email in below - as winners will received E-Gift cards. There is no obligation whatsoever, your name will not be mentioned and your email will not be shown to anyone but us.
Winners will be notified by email. You can only apply once. Good Luck! In the message, please write "Giveaway" or tell us your favorite movie!

We're Changing Our Name and Look!
SuzeeBehindtheScenes is becoming BehindtheScenezz.com! We are feverishly working on a new design, new features and migrating content over for a new reader experience. Our new look is on target for late 2020. So please pardon our appearance while we work behind the scenes to make it a better site for our fans. We will continue to provide the same content, but with a slightly new emphasis. Expect more movie and NYC/NJ event reviews, especially from a female perspective as well as more stories and interviews about inspiring females in entertainment and beyond.
Got an idea for a story? Let us know at Editor@behindthescenezz.com.
Staff Writers:
Senior Staff Writer Beth Abramson Brier
Connor Moriarty
Grace Manzo
Kelly Byrne
Emily Galow
Ashton Samson

THE CHICK TICKER - We cover #FEMALESINENTERTAINMENT - Updated each Month #MaryRichardsLives