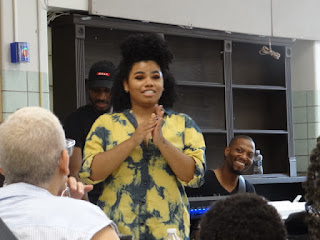 The threat of rain did not stop the fun at the second annual  Bergenfest, an event filled with music and fun to raise money and awareness of the non-profit organization TEEEM, which provides educational, medical and economic support to women, children and families in impoverished countries throughout the world. The nonprofit does this by working with students at local high schools.

Wé McDonald from the Top 3 of the 11th Season of NBC's The Voice was the headliner who came on at about 5pm after the full lineup of artists played throughout the day. Also playing that day were: Collision Theory, Fat Boi's Brass Band, Wishbone, Jason Recht & Friends, Jake Thistle, No Soap Radio, and Samantha Haase.

However, it was a hot summer day with a threat of storms so Ms. McDonald had to forgo the outdoor stage and and move herself and her band into the middle school auditorium. It was in this room that Wé gave an intimate, heartful and soulful concert for the several hundred students and adults who did not care about the lightning or humidity but just wanted to see this this local phenom sing that they had been rooting for while on The Voice. 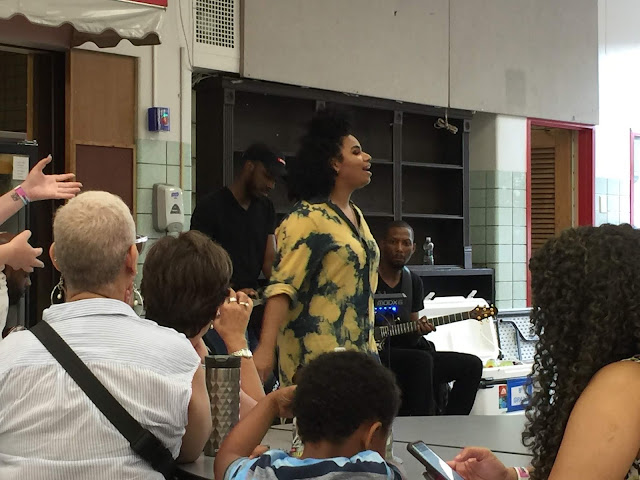 Wé sang several songs, and she sang with out a mike. At one point, someone handed her a mike but it wasn't working. However, everyone realized a mike was not needed as her powerful voice kept everyone quiet and mesmerized as she performed a medley of covers and originals.

She started off singing some songs accompanied by local guitarist and student Jason Recht including Stevie Wonder's Superstitious.. After that she brought our her band. She sang  a few covers including Sunday Morning by Maroon 5 and Bad Guy by Billie Ellish. Then, she treated the audience with a powerful and solid version of her original song, Head Up High.


She ended with a song that got the crowd up and dancing, her own pumped up version of Bruno Mars'  Perm. View that here:

In the audience were many of the students from the high schools that have a TEEEM program, including Pascack Valley, Northern Regional, Hackensack, Westwood, Waldwick and Ridgewood. Making a special appearance and getting their first glimpse of America was a group of female students from Senegal who traveled over with the TEEEM Site manager.