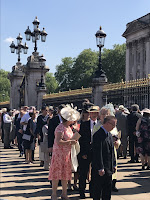 By sheer happenstance I had a chance to be in London last week for The Royal Wedding.  In this case happenstance was defined as cashing in some air miles and glomming on to my husband’s business trip, determined to not only write about the nuptials but procure a proper hat worthy of the event.   We landed early Tuesday morning and decided to go for a stroll to conquer the jet lag.  This is how I came to be outside of Buckingham Palace a few days prior to the wedding just as a crowd of elegantly dressed people moved closer to me.
I was so excited to be part of all the festivities (and find the right hat) that I literally accosted three women walking toward The Palace gates.  Before my husband could stop me I broke away, scooted under an iron guard rail (I’m rather short) and introduced myself to the women as a contributor to the entertainment blog, Suzeebehindthescenes.

I explained that I was writing an article about the marriage of the American Actress to the Eligible Prince. Meanwhile, somewhere behind the guard rail, my husband was wondering if he needed to contact the US Embassy.  I, however, was busy admiring their hats and enquired (British spelling!)  if they could tell me where I might find one.
Since the women were so gracious I decided to push it a bit further and ask if I could join them.  Their response was the epitome of British composure. They explained, as if to a very persistent toddler, that they were very sorry but they could not invite me along.  They and the others were going to a Royal Garden Party at The Palace at the invitation of Her Majesty Queen Elizabeth.  Not letting it go, I asked how I could get an invitation. 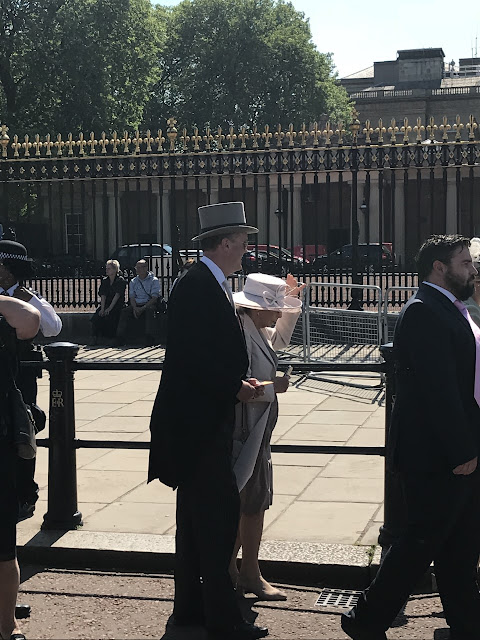 One of the women, a Councilwoman, patiently informed me that the Garden Party was to honor those who have served Queen and Country.  Having arrived in London only ninety minutes prior, I did not have sufficient time to serve such.  Perhaps if I had more notice (and the appropriate hat) I could have scored an invitation. Although I could not glom on to them, they were kind enough to take some photos with me.  After which they proceeded to join the other well turned out and (I was pleased to see) multi-culturally diverse Royal Subjects.

Update:  A day later I went to the shop they recommended and had a smashing time (as they would say) trying on hats.  I learned they are secured with headbands so as to achieve that jaunty look.  I am working on the other qualifications.