Behind the Scenes Goes to London for the Royal Wedding: Our Exclusive Pip Pip!! Awards for Those Who Can't Get Enough Harry and Meghan and Still Want to Read More About it 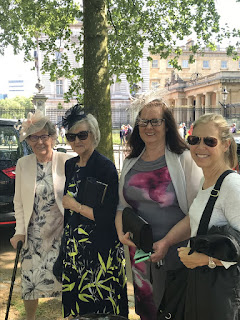 [Author’s note: Yes, I know you have been bombarded with articles about the Royal Wedding. And yes, you may even have “Tiara Fatigue” but I did not cash in my air miles, travel 3500 miles to London and crash the Queen’s garden party for you to scroll down. So Stay Calm and Read On.]

This ceremony shattered box office records everywhere. Nearly two billion people* tuned in to see the American actress Megan Markle star in the role of a lifetime. (And one thing we Americans know is how important crowd size is.) It had everything- intrigue, backstabbing relatives, spectacular scenery, shocking twists and romance, romance, romance. The cameo appearances alone were enough to make audiences swoon. Yes, the Royal Wedding is deserving of its very own award show.

And the nominees for the PIP PIP!! Awards are:

Clare Waight Keller for the elegant and understated wedding dress

And the winner is: Clare Waight Keller for Givency. Less is more in the time of Brexit.

“God Save the Queen” (known to Americans as “My Country Tis of Thee” although I’m not so sure that even God wants to step in at this point. But I digress. Again.);

“Stand by Me” the choir arrangement; “Ave Maria” magnificently performed by Sheku Kanneh-Mason on cello, and

“This Little Light of Mine”.

And the winner is: Stand by Me. For the bride who walked alone to the altar.

Princess Charlotte for “The Wave”

Kate Middleton, Duchess of Cambridge (simply because a few short weeks ago she gave birth to another heir to the throne. I, in that same period of time, did not change out of my flannel nightshirt);

George Clooney for his reprisal as “Danny Ocean”

and Victoria Beckham for “Stoic- The Melania Trump Story”.

And the award goes to: Princess Charlotte. Way to upstage your older brother, Princess!

Best Actor in a Starring Role

Prince William for his role as “The Best Man”*

Bishop Michael Curry for “The Sermon”

Prince Harry for “The Asides”.

And the award goes to: Prince Harry. That look!

* NO affiliation with Be Best

Best Actor or Actress in a Starring Role

Her Majesty Queen Elizabeth II for “Purple Reign: The Hat”;

Princess Diana of Wales (posthumously) for “Raising Princes” (a Jewish mother should be so proud);

And the winner is: Her Royal Highness the Duchess of Sussex. The new “Face of Grace”. In so many ways.

So here’s to the new bride and groom. May they live happily ever after in LaLand!
Oops, wrong envelope. I mean The United Kingdom.
Cheerio.