He bounces into the restaurant for this interview like a kid home on college break, slides into a booth  across from a friend eager to hear his story and orders a glass of apple juice. He has a friendly grin on his face. He always seems to have a grin on his face. especially these days when things are going well for this young writer-of-movies. This particular morning, it's also reflecting a feeling of relief after his son has snapped back from an appendicitis operation. Dana Glazer is doing what he wanted to do since he was nine years old.


On Growing Up In Boston

Born and brought up in Boston, when his parents would "go on date night," they would leave him with his grandparents. That meant Saturday mornings spent in their basement  - his grandfather showing home movies on his projector, his grandmother making popcorn and offering M&Ms. "Peanut M&Ms," Glazer clarifies."

He was enamored of superheroes who could fly through the clouds, rescue fair maidens, save the world! "I wanted to be part of that world, create those stories.," says Glazer. "My grandfather had a Super 8 camera and he told me, 'you write the stories, I'll film.' "
Here comes the grin again as he conjures up the scene of their special collaboration. "'I made clay figures. I built sets. Then I graduated to real people. "
They called themselves Danegram Productions: danegram.com. 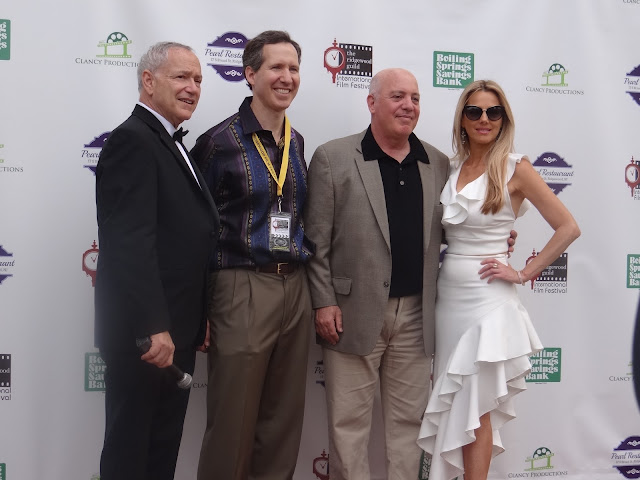 His Love of Movies

Saturday afternoons they would go to see Errol Flynn movies (Robin Hood, Sea Hawk), Indiana Jones, or a screen hero like Superman. "It wasalways special to be with my grandparents," he says. "And there was  magic in movies. Life should have as much magic as possible." He claims, " the film bug never left. I think, watch and make movies. "

Two films that have influenced his writing are "Brief Encounter" and "Somewhere in Time" with Christopher Reeves. He's fascinated with time travel, ghost stories.

In high school, he worked on a video, entering and winning  a New England Video Competition.  "It helped me get into college," he claims.  Later, at Bowdoin,  in Maine, his senior presentation would help to get him into  grad school.

He likes to describe Maine's weather:  "You have winter; then mud, lots of mud; then spring for two seconds; then summer." After Bowdoin, where he studied history  ("I encourage Liberal Arts.") he was a graduate student at NYU  film school.

His NYU thesis, "Intermezzo," a ghost story,  won a student academic award 1998. In 2002, he sold an original script, "Rise, Sons of Bowdoin," to Warner Bros, becoming a member of the Writers Guild of America, which made the front page of  the Hollywood Reporter.

The Idea for A Case of Blue

NYU was serendipitous for him. Attending art classes at NY Student Arts League, a model jogged a memory of someone he'd known long ago and he wrote the story, the germ of his movie, on a bus ride from New York to Boston,

At Tisch School of the Arts, hoping to find a designer for his movie, he picked up a student registry. He found the name of the woman who would become his wife as well as his designer. "The best book I ever read!" He and Deborah - "she is Deborah, he cautions, "never Debbie!" - married for 19 years, have two sons, Charlie and Jamie, and a daughter, Georgia.

Ironically, Deborah  loves theater, hates film.  "She's obsessed with hockey," Glazer says. "On her 30th birthday, her father asked what she wanted and she told him, ' I want to play hockey.'  He paid for lessons. Today she plays on a hockey team. She is a professional  designer of houses and offices in NYC, Philadelphia and the metropolitan area.

Glazer teaches  a class in film at FDU, sharing his passion. He plays weekly dodge ball and is a community activist in his town of Ridgewood, NJ, which he feels is important.

He has produced three documentaries, the first winning the attention of vice president Biden's council for the Working Dad's Summit, eliciting an invitation to DC where Glazer showed his film.  A second was Parents of the Revolution and the third, a tribute to Jim and Sarah Brady, featured interviews with Nancy Pelosi, Chuck Schumer and Dan Rather.

His first feature-length film, "A Case of Blue," with producer, Scott Rosenfelt ("Home Alone") will go into production this summer and will be filmed  in North Jersey, including Ridgewood.
Glazer exclaims, "I'm  getting "really positive energy" from "positive people for  A Case of Blue. Every day  I like to think we push the movie a little bit forward. Every day I'm focused on something good. " The grin again: "This is our community film project."
Glazer announces.

Open auditions for the film will be held Saturday, May 19, in Ridgewood, NJ.  He's looking for a special kind of actor. "There are performers who are good," he says. "Then it's magic. We're going for the magic."
For information on the auditions contact: DFucito@gmail.com