Movie Review: John Krasinski's A Quiet Place is Full of Hitchcockian Suspense and Sustained Palpable Tension - Will Horror Fans Flock to It?

Two men sit down at a fairly upscale restaurant and begin to discuss baseball. After about two minutes of conversation (Kaboom!) a bomb under the table explodes. The audience is left completely surprised, but the surprise is quick and their exhilaration fades after only a few minutes.

In telling this anecdote, Alfred Hitchcock subsequently suggests, that the filmmaker show the bomb under the table before the scene even begins. Taking this approach, fills every word of every sentence with dread and anxiety. Every second that the two men spend ignorant of the explosive beneath them, feels like hours of torture to the audience.

John Krasinski’s A Quiet Place, blazes through its 90 minute run time, utilizing at every possible moment, the patented and proven Hitchcockian brand of suspense.

Krasinski’s first foray into horror doesn’t contain much of a plot or concern itself with fleshing out its lead characters. Instead, every scene carries with it, a sustained, palpable tension. Just as Hitchcock suggests showing the audience the bomb prior to the scene’s opening, Krasinski shows it to us, before the titles appear. Except in the place of a bomb, we have seemingly invincible monsters, with hypersensitive hearing.

This is where the film truly shines as every scene, every cut, and every step a character takes is nearly drowned in the expectation that everything can and will go wrong. The final thirty or so minutes of this film, bask in this anxiety laden emotion.

Laundry, the whole thing that sets off the catastrophic ending, is initiated with a batch of laundry. Emily Blunt’s character, who’s baby is due any day now, pulls up a nail with her laundry bag. Later on, her water breaks. In an attempt to find out if her husband and son are close by, she hustles down to the basement where all of their surveillance equipment is. Except, you guessed it, she steps on the nail. From here, we are treated to non-stop action that manages to escalate, take a short break, and then ramp right back to its peak in no time at all, keeping its pace until the film ends. 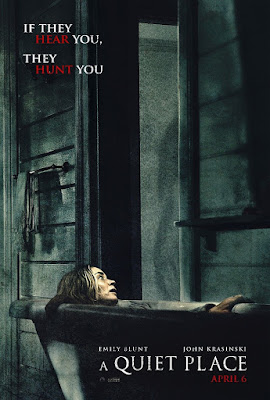 At times, A Quiet Place bears a striking resemblance to Trey Edward Shults’ 2017 film It Comes at Night. Both take place in a post-apocalyptic landscape and follow a family’s fight for survival. However, It Comes at Night is far more concerned with developing a malicious atmosphere of uncertainty and paranoia as well as its characters. At the time of its release though, many viewers lamented its methodical pace and lack of any real ‘scares’ or ‘action.’ In many ways, these criticisms are valid, but keep in mind that the marketing for It Comes at Night billed it as something more akin to…well, A Quiet Place.

A Quiet Place, at times, feels like a response to It Comes at Night. Where Shults wants the audience to question the paranoia affecting his characters, Krasinski shows in the first five minutes that his characters have every reason to be as afraid as they are. Similarly, Krasinski’s monsters are shown outright in broad daylight, whereas the ‘It’ in It Comes at Night is completely ambiguous and left solely to the interpretation of the viewer.

Both tactics result in lukewarm projects though. With so many films saturating the post-apocalyptic genre, it’s difficult to stand out. So, while A Quiet Place isn’t really attempting to be anything more than it is, the fact that it is lacking in characterization and atmosphere, hurts it more than it helps.

Krasinski’s characters are interchangeable and lack any sort of depth. They are afflicted with fear, tragedy, and loss, but given the world they inhabit, this isn’t anything groundbreaking. As a result, the characters’ expendable nature dilutes the tension in some scenes. While those scenes are still fraught with anxiety, they also suffer from being extremely predictable. Any viewer who’s even remotely versed in the horror/thriller genre, will be able to see nearly every twist and turn the plot throws at them.

"This movie is really about, protecting your family. When I first read the script  I was holding my baby, and I was crying." - John Kransinki

The film also relies somewhat on jump scares – some of which are egregiously false. They do peter out towards the film’s conclusion, but their inclusion in some of the earlier scenes doesn’t set a good precedent. To boot, the blatantly CGI monsters are a bit generic. One look at Stranger Things’ Demogorgon, the monster from 2017’s The Monster, or even the Mutos from 2014’s Godzilla, will reveal an altogether puzzling trend as none of the monsters in these films are particularly scary or disturbing either.

Ultimately, what we end up with is a film that succeeds admirably in what it sets out to accomplish. Casual horror/thriller fans will be shocked by the film’s twists and feel their knuckles pop from their hands towards the film’s end. Conversely, the same can’t be said for all veteran genre fans, as they may be left wanting a little more out of the world and characters.

John Krasinski is definitely a director to watch and it’s great to see his career shift pay off for him so well. If he continues to employ the skills he puts on display here, fans can look forward to what is sure to be an exciting body of work.