Well I was not expecting it, though I should have - that the line would be over 200 people long to see the Queen of Hallmark and Fuller House Fan Fave Candace Cameron Bure. I went to see her book signing at a local bookstore, Bookends in Ridgewood NJ,  Located a train ride from Manhattan, this book store gets all the A-listers. And this time, they had the former View co-host signing her new book, Kind is the New Classy, the day she was on the View because it was THE DAY her new book dropped.

I didn't even get the book as they sold out. I bought her other book, Staying Stylish.


The line was out the door around the building and in the back. What struck me most about the line was the generations of people on it, from 3 years old to 73 years old. She has the Full House watchers who are in their 20's -30's now, the Fuller House watchers which are really little and the Hallmark addicts, myself included, that span, I would say, young teens to seniors. 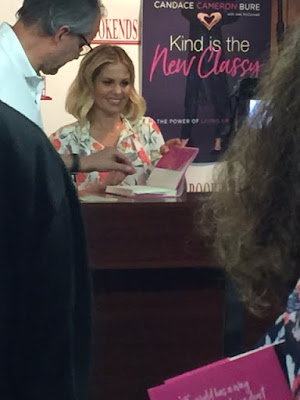 In front of me was a dad who stayed on that meandering line with his 7 year-old daughter for about 2 hours. The girl behind me in her late 20's -  who I got to know really well on that line- was a Full House fan as she grew up watching it  during her childhood. One of her friends had a Full House replica house (did not  know that existed) that she wanted Candace to sign. She was hopeful when she saw someone else with the same box, but it was in the hands of a child I don't know if Candace signed it.

I do know that Candace signed everyone's book with a smile. She also talked to anyone that talked to her. Everyone got their photo with her I don't know how she kept that smile on her face so late into the evening when I knew she had a jam-packed day.

When it was my turn, I wanted to ask her a question, I was going to ask her what her favorite Hallmark movie was. I thought maybe I would get the politically correct answer of "I love them all:.
But I didn't.

"My favorite is Just The Way You Are. It's from a while back, not very well-known. But I just love it because it's soooo romantic. It's about a couple that rekindles their relationship, it's just such a good movie. - Candace Cameron Bure 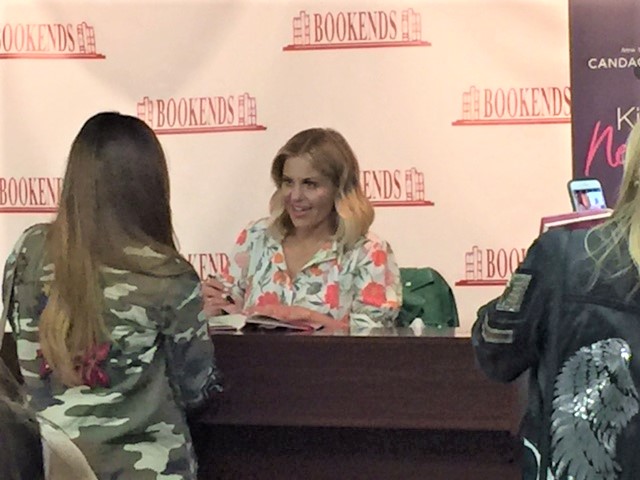 I did not recall watching this one..my favorite of late is Switched for Christmas- but it's available on-demand. Here's a trailer; https://www.imdb.com/title/tt4380580/videoplayer/vi3516314137?ref_=vi_nxt_ap 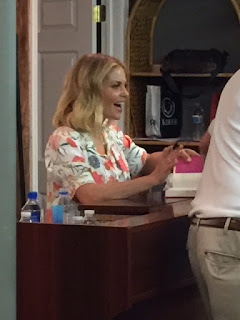 Candace stayed longer than she was supposed to at the book signing, kept a smile on her face and did not complain at all, And I've seen authors complain. I bet she even signed the houses.