Egg is a complicated film about the complications of surrogacy. Set in a funky New York City apartment and revolving around 2 couples and one surrogate, the complex issues of motherhood are presented in a sometimes humorous, and sometimes serious manner. Art is used as a physical backdrop to the movie yet is also integral in the storyline. Many issues are raised - motherhood, work, patriarchy, feminism, wealth, success, friendships, love, and marriage.


The movie leads a lasting impression on the possibilities of motherhood for the future because of science and new modelling and leaves the viewer questioning just where we are at in this day and age and how the availability of so many choices makes starting a family actually a much more difficult proposition than perhaps just 20 years ago. It begs to answer the question, can a woman still have it all?  And if so, how and to whose detriment or success?  This movie presents one scenario on how the traditional matriarchal and patriarchal roles co-exist, parallel and also collide with the new menu of motherhood choices. This is a must-see for the new millenium.


The film was directed by Marianna Palka (Bitch, GLOW).  It stars Alysia Reiner (OITNB, Equity) and Gbenge Akinnagbe (The Duece, The Following) as one married and "pregnant" couple, and Christina Hendricks (Mad Men, Good Girls) and David Alan Basche (The Exes, Equity) as the other  pregnant couple. Anna Camp (Pitch Perfect, Good Girls Revolt) plays the shallow yet filled with life surrogate.


The film was produced by Alysia Reiner and David Alan Basche, who also produced the feature Equity with Michele Ganeless (President, Comedy Central 2004-2016). It is the first feature written by Risa Mickenberg, who said it was based on decisions she was faced with.


After the premiere, there was a panel discussion by the actors and crew. Alysia Reiner started talking about the film by stating one of her favorite quotes. "The personal is the political, and the very personal, is art. And for me, that is what totally attracted me to this script in that it has a very political nature to it and in that way it's very philosophical. And for me, the best entertainment is both entertaining and fun but also deeply philosophical." - Alysia Reiner

I asked Christina what drew her to the film. She said, Aside from the subject matter, as soon as I read the script, I knew this was a movie for actors. I could tell right after the first few pages. No car chases and action, just actors getting a chance to practice their craft. It's like the old movies like when actors just sat around a dining table and reacted with each other. I could do this all day." - Christina Hendricks

The after party was held at TAO,  a few blocks from the theater. It was a crowded party with passed appetizers including Asian fare and Sliders. This private party was attended by cast and crew. All starring actors were there except for Anna Camp. 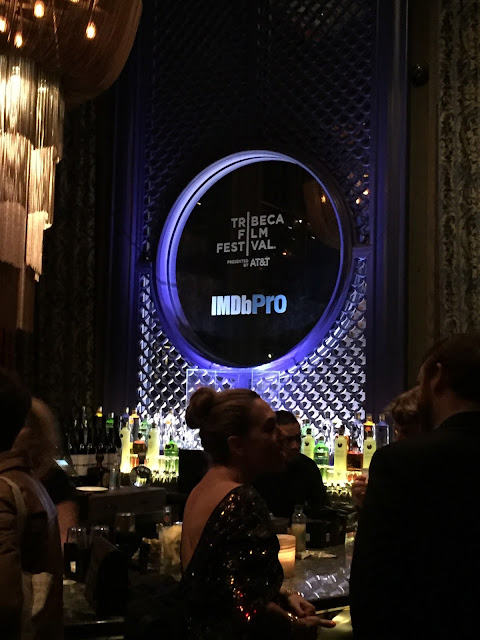