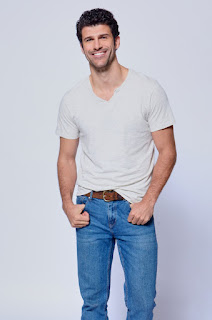 By Markos Papadatos
Senior Writer and Powerjournalist
Photo Credit: Courtesy of Brain Poweer Studio Rights Inc.
Franco Lo Presti is the star of the new Hallmark original film "14 Love Letters," which recently premiered on Hallmark Movies & Mysteries. In addition to Lo Presti, the film stars Vanessa Sears and Madeleine Claude, and it follows the story of a young woman who finds herself in the possession of some romantic love letters.
In August 2022 Franco Lo Presti can be found in  "The Story of Love" on UPtv opposite such actors as Brittany Bristow and Neil Crone. With over 27 acting credits, Franco is someone you've probably seen in many of your favorite shows and movies.

His Love Of Soccer

The actor was born and raised in Scarborough, Ontario. He developed a love for soccer and guitar from a young age. As a soccer player, he scored a Division I scholarship at the University of Rhode Island, where he studied theater.

After succumbing to a hip injury, he puts his soccer career on pause. At 26 years old, he took on acting classes, and that was where he found his true calling in life, as well as his purpose.

His Favorite Things to Watch

His favorite movies include "The Godfather" and "Life is Beautiful" starring Robert Benigni. "Each time I watch 'The Godfather,' it's a masterpiece," he said. "I grew up watching 'The Godfather' with my father. 'La vita è Bella' is an Italian film with Roberto Benigni and it is such an amazing film."

He shared that he enjoys to binge-watch the series "Why Women Kill," and a lot of movies and documentaries. "The last movie I watched was 'The Last of the Mohicans,' just the soundtrack alone gets me going," he said.

In an effort to unwind and relax, he likes hiking, reading, playing his guitar, as well as playing soccer every once in a while. "I am big on meditating lately, and just listening to my breath," he said. "As an actor, my body is my instrument, so I try to take care of myself. My breath is my connection to God, I am very spiritual."

It's All About Ice Cream and Burgers

His favorite cheat meal is "ice cream." "I'm a massive ice cream fan," he said. "If there is an ice cream eating competition in the United States, I would 100 percent join, and nobody would be able to beat me in it," he added.

"I also love a good burger," he said with a sweet laugh.

He listed the 1,500 meter run as his favorite track and field event. "I was a great runner," he admitted. "I'm good at long-distance runs. I would also love to do the pole vault."

His two favorite strokes in swimming are freestyle and breaststroke.

On Living a Good Life and Measuring Success

On his favorite mottos to live by, Lo Presti said, "No little lies because they always grow on their own." "If you have nothing to hide, then hide nothing," he said. "Also, hard work breeds success if you show up for the opportunity. Be honest and be prepared, I love those."

For Lo Presti, the word success means being authentic and "unapologetically yourself." "That comes with loving yourself and trusting who you are," Lo Presti explained. "Be yourself!"

A sneak peak of "14 Love Letters" may be seen below.