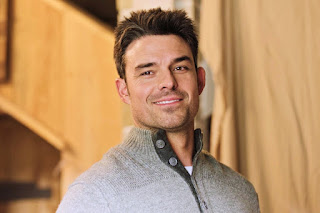 By Markos Papadatos
Senior Writer and Powerjournalist
Photo Left Credit: Courtesy Vortex Pix
The talented actor Jesse Hutch recently starred in Christmas in Toyland on the Hallmark channel opposite veteran actress Vanessa Lengies. He also stars in Love, Bubbles & Crystal Cove alongside Stephanie Bennett, which aired on  September 4th on UPtv.  He is a veteran actor in TV movies for the popular cable stations in such favorites as For The Love of Chocolate, Inn Love by Christmas, Chateau Christmas, Love on the Road and more. He recently completed the movies Dream Wedding and The Love Club: Sydney's Story. You might also recognize this versatile actor from his roles in Batwoman, The Series.

He revealed that his favorite movies include Gladiator, Saving Private Ryan, Forrest Gump, Good Will Hunting, Fight Club, and The Shawshank Redemption. "There are so many movies that I love and grew up watching," he admitted.

His favorite TV series to binge-watch are The Terminal List starring Chris Pratt and Outer Range with Josh Brolin. "I have also been watching rom-coms from the '90s. That era had the best movies," he said.

Hutch shared that his favorite cheat meals include "pie" and "ice cream."

What His Superpower Would Be

If he were to have any superpower, it would be to "be indestructible." "I would do the greatest stunts ever. That would be pretty rad," he said.

How He Lives His Life

His favorite mottos to live by include: "Keep your head in the clouds and your feet on the ground."

In his personal life, Jesse Hutch is a happily married man to his wife, Loreili, and they have three kids. For Hutch, family is of utmost significance. "Family is very important to me and it should always come first," he said, especially since they are "always growing and learning together."