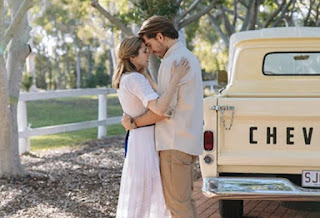 Australian actor Julian Haig is the star of the new romantic comedy Love In Bloom, which premiered on Great American Family in August 2022. Directed by by Rogue Robin, Julian  stars opposite Susie Abromeit.

His favorite series to binge-watch is Obi-Wan Kenobi, especially since he is a massive Star Wars nerd. "I mostly watch movies, to be honest," he said.
He revealed that his all-time favorite movie is the original The Karate Kid, as well as the 1983 film BMX Bandits, which was Nicole Kidman's first-ever movie, and was also written by his father Russell Hagg. "I grew up watching it so it was the best plus my dad wrote it so that's pretty cool," he said.

Haig is also a fan of the new Top Gun: Maverick movie, starring Tom Cruise, which he saw three times in the cinemas. "It was so good," he exclaimed.

In an effort to relax and unwind, Haig enjoys meditating each day. "I wake up and set aside time for meditating, and it makes me feel really good," he said. "Wim Hof Breathing leaves you feeling really centered, grounded, and energized. I also pray and I work out at some point of the day, and I read a book."

His favorite motto to live by is the "Serenity Prayer." "I say it to myself every day and it helps relax me," he said.

His Views on Life

On the title of the current chapter of his life, Haig said with a sweet laugh, "Actually Growing Up."

Julian Haig defined the word success as "contentment with what he has." "That really means more gratitude," he said. "I am driven to act more and create more. Being creative as much as possible means success, so basically, living a creative life," he said.