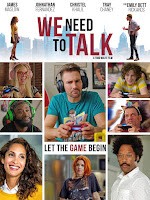 Daytime Star Christel Kahlil (Lily, Young and the Restless) stars alongside James Maslow (Nickelodeon's Big Time Rush, Lionsgate's My Boyfriends' Meds) in the new rom com movie We Need to Talk. The movie is about Great Scott, a video-game influencer who speaks to millions of his online fans every day but has problems talking to people in his real life including his girlfriend Aly, played by Christel. Soap fans will love seeing Christel in this part as a very cool girlfriend.
Great Scott remains blissfully unaware that he has a problem until one morning, as she’s walking out the door, his girlfriend Aly (Christel Khalil) tells him, “We need to talk.” Aly’s comment sends him into a day-long tailspin.
Throughout the entire agonizing day Great Scott seeks wisdom, advice, and emotional support from his social media network of friends, Tango (Tray Chaney), internet trolls, a myriad of online characters from around the world, and from people in his real life – Joe (Johnathan Fernandez), his producer, and Amber (Emily Bett Rickards), Aly’s best friend. Several influencers/gamers have cameos.
Christel states, "The wisdom of the (script) was really amazing…it shows how we get caught up in our lives, in our jobs, we forget about the people close to us. It’s important to recognize those people. I think it is a really good lesson, for myself included. Where social media is concerned, and ‘likes’ - "It’s all about balance. We need balance in life."
An award-winning actress, Christel was born and raised in Los Angeles, CA. Christel has been a staple on the long-running CBS series The Young and The Restless, where she has been filling the role of Lily Winters for more than a decade. Her Y&R role has garnered her a Daytime Emmy Award for Outstanding Actress in a Drama Series and an NAACP Award. Christel is also a seasoned comedian and has witnessed guest-starring roles in such shows as 2 Broke Girls for CBS and Fox's Malcolm in the Middle.
The movie is now available on Itunes, Amazon, Microsoft Movies & TV, GooglePlay, Youtube and for free on Tubi. For more information on where to see it visit here.
The movie is written, directed and produced by Todd Wolfe. Ray Carballada and Larry Weitzner are Executive Producers. The movie is made by Ampifly. It is released by Global Digital Releasing. For more info: https://www.weneedtotalkmovie.com/
Editor's Note: Like new music? Listen for "Talk" by Zoochie in the bathroom scene.
Email ThisBlogThis!Share to TwitterShare to FacebookShare to Pinterest
Newer Post Older Post Home