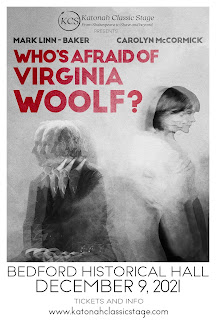 Trent Dawson's Katonah Classic Stage (KCS) will present a benefit reading of Edward Albee’s, Who’s Afraid of Virginia Woolf, at the Bedford ()NY) Historical Hall on December 9, 2021. The lead roles of Martha and George will be portrayed by two actors with extensive Broadway credits who are perhaps best-known for their television roles: Carolyn McCormick best known for her leading role in  Law & Order and Mark Linn-Baker most beloved for his role in Perfect Strangers and most recently on Succession.Rounding out the cast is Jaren Zirilli and Evy Ortiz.
Founding Artistic Director Trent Dawson is an actor and director, best known for his long-standing, Emmy-nominated role on As the World Turns, who has been working on television and on stage for nearly 30 years. He and his creative team are excited to move forward with a series of benefit readings this winter to keep classic theatre on the forefront of the community’s minds, “The response to Oleanna was wildly positive and the number one question we received from audience members each night was, ‘What’s next?’” Dawson adds, “These readings are a means to give people a way to enjoy classic theatre in a more relaxed setting. We are so excited to be able to bring the best classic plays to life locally with incredible talents like Carolyn McCormick and Mark Linn-Baker.”

This bitingly funny play centers around a university professor, George, and his wife, Martha, who have an after-party get together with hot, new, young professor, Nick, and his “mousey” wife Honey. George and Martha have a passionately dangerous “cat and mouse” relationship and as they play with each other, and their guests, the evening, and the lives of all four present, quickly unravel. This show is a fiercely dynamic and satirical look at the fragility of the relationships we hold most dear and a metaphor for the tenuous state of America in the middle of the cold war.

Doors open at 6:30 p.m., and audiences can expect to enjoy drinks and refreshments with an opportunity to participate in a question and answer session with the performers after the reading. Woolf is the first in a series of three play readings that KCS expects to present throughout the winter.

The full 2022 season of KCS is currently in development. Ultimately, KCS aims to provide seasonal, professional productions of classic plays in Northern Westchester, cultural enrichment events like the KCS Film Festival, play readings helmed by Broadway veterans, and they will eventually offer educational programs to children and adults with an emphasis on Shakespeare and other master dramatists. Staffing, casts, and crews will draw from the exceptional talent found locally as well as New York City and the tri-state area.

Tickets: On sale now at www.katonahclassicstage.com/woolf