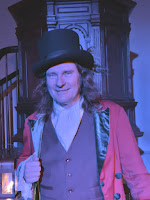 One thing is certain, witnessing Jonathan Kruk perform is an extraordinarily unique experience. He has been performing one-man-shows of The Legend of Sleepy Hollow and A Christmas Carol since 2010 and 2011 respectively. My family and I have attended these two performances every October and December since I was seven. As a loyal fan, and after attending Mr. Kruk’s performance of A Christmas Carol once again this past weekend, I decided to examine why his performances are so unique and why he continues to captivate all who witness his magic.
Allow me to provide brief context as to this storyteller’s background. Mr. Kruk grew up in Westchester County, New York, earned a B.A. in English from Holy Cross College and an M.A. in Education from New York University. His study of literature and his experiences as a child telling his brother bedtime stories led to an epiphany: people enjoy being told stories and interacting with their storyteller.
Mr. Kruk went on to study creative drama in England, and later honed his craft by performing at over one-thousand children’s birthday parties. In 2010, he became affiliated with the Historic Hudson Valley Society, an educational and historic preservation organization in Tarrytown, New York, where he became well-known.
It cannot be understated just how impressive it is to witness Mr. Kruk, the master storyteller, weave a tale completely solo without missing a beat. But for minimal use of music and sound effects, the entire hour consists of him frolicking around the historic Old Dutch Church, shifting from narrator to leads, supporting roles and mere passerby with exceptional eloquence and charisma.
On every occasion that I have seen him perform A Christmas Carol, Mr. Kruk has effortlessly carried the immense weight of the literary classic on his shoulders. This evening was no exception. The audience was simply captivated by Mr. Kruk, who brilliantly shifted his cadence and accents portraying approximately thirty characters. From Scrooge, to Marley to the Ghost of Christmas Yet to Come, and back to the narrator again, he was  miraculously able to balance  joviality, humor and even a bit of horror.
I would be remiss if I didn’t mention the ambiance of the Old Dutch Church, founded in 1685. Everytime I walk past the old cemetery up the candle lit path  to see a performance, I half expect to see Marley’s apparition. It still has not happened, but one can wish. 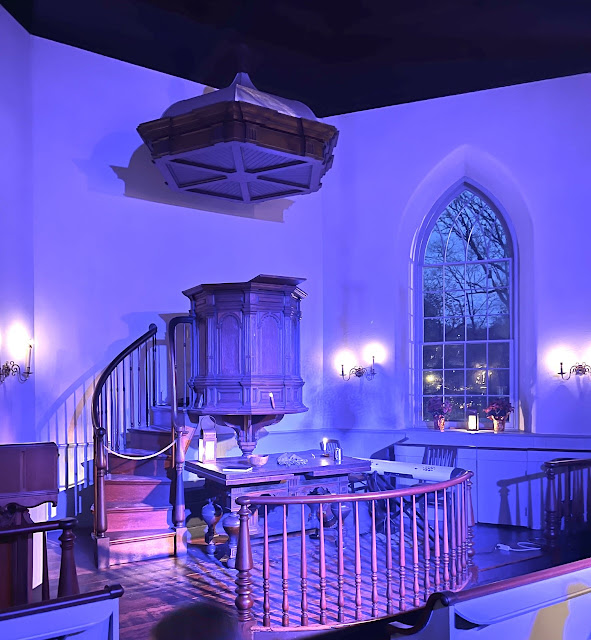