Review of David Lowery's The Green Knight: Honor and Chivalry are at the Forefront of this Timeless Story, Dev Patel Shines 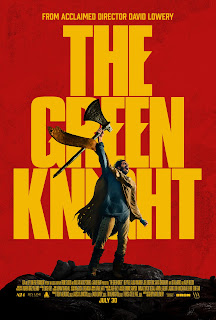 By Ashton Samson4/5 🌝🌝🌝🌝
There’s a little bit of Gawain in all of us. That's my principle takeaway from The Green Knight, David Lowery’s new adaptation of one of the best-known Arthurian works, the 14th century chivalric romance, “Sir Gawain and the Green Knight.” Those who know next to nothing about the original text or any such legends and who are looking for a straight action film might be left a bit disappointed as there are no Games of Thrones-esque battle sequences and the pacing is sluggish. However, those who are avid fans of Arthurian legends and who are somewhat familiar with the original poem should rejoice.
The Green Knight is one of, if not the best adaptations of an Arthurian legend that remains faithful to its source material, all while adding a new dose of originality and flavor to a timeless legend. Why is it timeless, you might ask? It's timeless because, going back to where I began, we all have a bit of Gawain in us.
As ambiguous as The Green Knight may be, one aspect that could not have been made any clearer is the communication of its main theme, which is honor and the ways we can achieve it. You can have all the debates you want about what several characters' motivations and purpose to the film are (I’m looking at you Morgan Le Fay!), but it doesn’t really matter in the long run.
What, in my mind, makes the movie so satisfying is the masterful expression of the theme of honor. Gawain’s whole journey of self-discovery, revolving around how difficult it is to achieve greatness as a knight, is the means by which Lowery explores the timeless themes of honor, chivalry and the accepted code of knighthood.
The film and Gawain’s journey is akin to a classic and quite brilliant coming of age story, one of moral and spiritual development. As Gawain learns about how to be a great knight, so do we. It is at this point where we begin to see the ingenuity in the title. The Green Knight, of course, refers to the enigmatic giant who is the catalyst for Gawain’s journey.
However, on a deeper level, it could refer to the main character’s naivety regarding the realities of both knighthood and being a king. Thus, he is a “green” knight, someone who is lacking training, sophistication and worldly experience. When the title for a film is clear in its meaning and relates back to the themes featured in the work, such is the case here, you know you're in good hands.
Dev Patel as Gawain handles the evolution of his character with just the right amount of subtlety. The transition of his character from an ignorant coward to an honorable man is not jarring or glaring, but rather it is a gradual transformation. As the film progresses, he realizes just how much he really wants to be faithful to the code of knighthood and succeed in being worthy of honor.
It is this view of honor that Gawain ultimately grasps that brings a sense of universality to the tale. Everyone wants to be worthy of honor, not just a knight. While we may all have that desire, most importantly, we all have to learn at one time or another that one cannot cheat one’s way to gaining honor, akin to when Gawain wears the magic sash. Sometimes, doing the truly honorable thing isn’t easy.
The journey to that realization in this wonderful film is a thrilling adventure, with an emphasis on masterful execution, inspiring cinematography, excellent acting and thematically sound material that has and will continue to endure throughout the ages.
No matter what, legends never die.
YOU MAY LIKE
Ashton reviews Minari:
https://www.suzeebehindthescenes.com/2021/03/movie-review-of-minari-haunting.html
Follow/Visit Ashton on Twitter: @Ashboomstick2
Email ThisBlogThis!Share to TwitterShare to FacebookShare to Pinterest
Newer Post Older Post Home