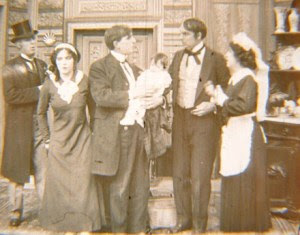 Launching during Women's History Month as of March 19, 2021 is a series of films called "Trailblazers of Early Cinema" on the platform HERFLIX. The Women's Film Preservation Fund of New York Women in Film and Television has partnered with HERFLIX to bring these films free to all viewers. Herflix is a new boutique online movie theater.

To view the programs, register and stream for free at HERFLIX.com.

These films were preserved with support from the Women’s Film Preservation Fund and in partnership with UCLA Archives, EYEFILM, George Eastman Museum, the State Historical Society of North Dakota and the Library of Congress.

Women’s Film Preservation Fund (WFPF) is a volunteer run committee of NYWIFT and is dedicated to preserving motion pictures made by and about women. All donations go to the preservation of films so they will be available for future audiences. To support our efforts - please consider giving a tax-deductible donation. For more information visit: https://www.nywift.org/womens-film-preservation-fund/

You May Like: Jodie Foster Talks about Producing Her Film about Alice Guy-Blache