Film Review of Thomas Vinterberg's Another Round: This Danish Dramedy about What We All Share as Humans - Indentity, Purpose and Motivation - is the Perfect Film for Now 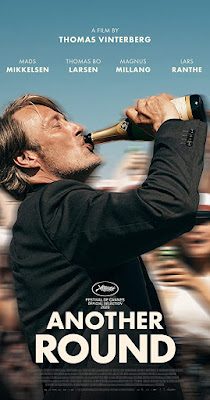 I’m Thinking of Ending Things, Soul, Possessor, Sound of Metal - all of these films have something in common.

2020 was a challenging year for all of us. Silver linings were few and far between, if not completely absent. However, one universal we were all presented with was time. In an instant, the hustle and bustle of our daily lives slowed down. Of course, that means something different for everyone. But regardless of circumstances, we were all called at some point during the year to stop and think about what kinds of people we are. And the cinema of 2020 reflected that.

Identity. Purpose. Motivation. These are heavy, heady and difficult subjects to address without being preachy or melodramatic. The films mentioned above manage to flawlessly walk the fine line between the kitsch and the superficial to create meaningful, authentic stories. And each in their own, unique way. However, no film in 2020 did it better than Thomas Vinterberg’s Another Round.

The Danish dramedy focuses on four middle-aged men who have hit somewhat of a glass ceiling in their lives. Yearning for the lost vigor of their youth, they embark on an experiment - maintain a constant low level of intoxication.

It’s a simple premise and things begin as you might expect. All four men, previously high strung and dull, experience a resurgence in their professions and relationships. The inclusion of alcohol into their daily lives lights a fire within them, encouraging them to come out of their shells and be the interesting, exciting people they’ve always wanted to be.

This leads to a lot of endearing character moments. The highlight of the bunch shows one of the men, Tommy, a youth soccer coach, mentor a small boy who isn’t as talented as his peers. Sober Tommy likely wouldn’t have paid the kid any mind and would’ve been content allowing him to fade into the background. Intoxicated Tommy takes the kind under his wing, though, and with his encouragement, the young boy becomes more confident in himself and his abilities. So, when the little guy scores a goal and Tommy’s friends stand and cheer and scream about how good of a coach he is, you can’t help but do the same.

All the characters go through moments like this and Vinterberg’s screenplay does an excellent job of keeping things fresh. No one sequence feels like the one that came before it. Moreover, they’re almost all either hilarious, heartfelt or both.

However, as you might’ve guessed, it all comes at a price.

Another Round doesn’t shy away from the dangers that alcohol and alcoholism pose. However, it is not anti-drinking. Because the film’s antagonist is not the bottle, it’s our four leads. None of these men have anyone to blame for their lots in life, but themselves. And it becomes abundantly clear that the drinking was only an excuse for them to act like they’d always wanted to, but for various reasons...didn’t.

This downward spiral climaxes in a heartbreaking tragedy that not only sobers the characters, but the viewer as well. It’s genuinely upsetting, especially after everything that’s come before. Juggling these emotional extremes is a difficult task, but Vinterberg and company do so with class and proficiency.

By the film’s end, you might think you know where it’s going. If I’m going to give one small criticism, it’s that a lot of the film’s events are a little predictable. However, the same cannot be said for the ending. I won’t spoil it. It’s something you have to see for yourself.

However, I will tell you that it’s one of the most beautiful, feel good and life affirming scenes.

Of course, great characters and great stories are incomplete without great actors and Another Round is filled with them. Magnus Millang, Lars Ranthe and Thomas Bo Larsen all turn in terrific, empathetic performances. Their group has incredible chemistry and you almost feel left out when you see how wonderfully they all get along.

However, the standout here is Mads Mikkelsen. His character’s arc is the most fleshed out of the group, requiring him to give a performance that takes his character on a roller coaster across the emotional spectrum. And he doesn’t miss a beat.

It’s these wonderful performances combined with the energetic script and beautiful direction that makes Another Round an unequivocal ‘complete package.’ Moreover, it’s message about the beauty of life and the reward that accompanies being your authentic self, is just what we all need right now.

As of this review, Another Round is available to rent affordably on most streaming services.