Be Natural: The Untold Story of Alice Guy-Blache, A Documentary About One of the First Female Filmmakers Screened at Teaneck Film Festival: Jodie Foster Speaks About How a Century Later Equality Behind the Camera is Not Fast Enough

Academy-award winning actress, director and producer Jodie Foster stopped by Teaneck, NJ for a screening of her documentary, Be Natural, The Untold Story of Alice Guy-Blache. Foster is the executive producer and narrator of this documentary about Alice, whom some people are familiar with as being the first true female motion picture director but whom many know little or nothing about.

And that was the purpose of this film. The film was made by documentary filmmaker Pamela B. Greene, who painstakingly detailed and traced the life and times of Alice Guy-Blache using any avenues she could including personal as well as technological means. With a Jersey connection, Ms. Green followed Alice's' beginnings in France as a secretary at film equipment company to her full career and family life in New Jersey. She still has some family remaining in NJ, and many of her relatives contributed their knowledge to this film.

The film accomplished it's objective - the viewer gets a complete and accurate picture of  her ambitions, her struggles and, her accomplishments in this period of time on this earth and also touches upon the relevant aspects of her personal life. It is a film for everyone, especially anyone interested in cinema to watch, as her life chronicles the birth of film as we know it. My guess is that Ms. Greene has documented facts and stories about this inspiring filmmaker and creator that had never been uncovered before.


One of the greatest takeaways I got from the film was how, due to poor record-keeping, the fact that credits as we know it were not put on films, and because of the male-dominated business environment, that Alice was not credited with many of the films she actually made and certainly not credited with being the pioneer and groundbreaker that she truly was. In some instances she had to fight to get credit for her own films in the history books and yet for one film that she did not care for at all she was mistakenly credited as doing so and was unable to change it. I also appreciated that the film paid tribute to other female colleagues during her lifetime that were also making contributions to the world of film. Many of those women are more recognized than Alice is. 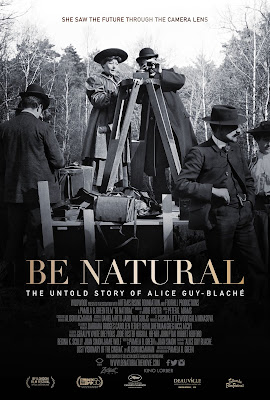 Another takeaway was what Alice captured on film. At the time she was working for one of the first motion picture companies in France, much of what was on the screen then was meant to record history, or as a documentation of facts. Alice began telling stories in her films, and she did this with quite a sense of humor. At one point in the documentary Pamela Greene juxtaposed some shorts Alice did of physical humor with some funny Youtube videos of people doing similar stunts. Indeed human nature has not changed and in a way Alice pioneered what would continue to be portrayed in film.

According to the website:
Alice Guy-Blache produced or directed 1,000 films, including 150 with synchronized sound during the ‘silent’ era. Her work includes comedies, westerns and dramas, as well as films with groundbreaking subject matter such as child abuse, immigration, Planned Parenthood, and female empowerment. She also etched a place in history by making the earliest known surviving narrative film with an all-black cast. After a decade of making films at Gaumont she had a second decade-long career in the U.S., where she built and ran her own studio in Fort Lee, NJ.


Following the screening, there was a panel discussion with a Q & A. Participating on the panel were Director Pamela B. Green, Jodie Foster, State Senator Loretta Weinberg and Tom Meyers of the Fort Lee Film Commission.


During the panel discussion, Jodie spoke about female filmmakers. She said, 'It's the major studios that have seen women as risks." She included other minorities and said that she did not think it was purposeful, adding  "I think it's a psychological phenomenon."

She also added hope. "I think that that's changing as far as mainstream filmmaking" but added, "I don't think it's changed fast enough."

Video: Pamela B. Greene Talks about The Film

During the discussion, Pamela B. Greene talked about how the film was available for educational purposes. She was also very proud to note that "the film is a document, it's changing history." She said that a film like this is "creating strenghth" so that other films can be made about underrated women in other industries.

It is no doubt that New Jerseyans will be paying tribute to Alice Guy-Blache because of her ties to NJ and as NJ becomes more widely known for film due to the new film tax credit incentives. (Fact: Northenr NJ was a hub for movie studios at the beginning of the 20th century).

But then, due to the nature of the business and as men took over her accomplishments as well as the role-modelling she may have been to other females got lost in the shuffle, -lost in the history books as well. Until now.

I hope that this film will be seen in every film class and especially be seen by every aspiring female filmmaker.