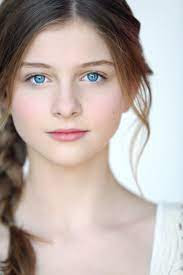 By Suzanne Ordas Curry
Meet Jane Widdop. This up and coming actress stars as Angie, a teen who is trafficked in the newly-released film Angie: Lost Girls. In it she plays a suburban girl who falls prey to some of the worst things a parent could imagine, all because of a boy (played by Dylan Sprayberry of the CW's Teen Wolf) who lures her into a world she may not be able to escape.
I had the chance to interview this talented young lady, who spoke candidly about how deep the part was and how she hopes it will spread awareness about this other plague around the world, which worsened during the pandemic. And she tells us what she can about her upcoming role in the new Showtime series Yellowjackets
.
Or Watch here:  https://www.youtube.com/watch?v=4DoHJUIwX3s
In this interview you'll also hear:

What her first TV appearance was (Hint it was about two girls with not a lot of money)
Why the topic of her new film, trafficking, hit so close to home - and about the weird texts her friends used to get.
About the "depth" she felt onset and how she had to find the light and levity between takes.
Why she makes a playlist for her roles, and what was on her master "Angie Playlist" - songs that were uplifting and then turned dark.
How she learned to sing for the role and from whom, as well as the simple reason she  chose to play the ukelele for the movie
What her shows to binge on including  Bridgerton, Outer Banks, and whoa... all of Criminal Minds
What movies make her "happy".
What she's been doing to relax during the pandemic. Aside from yoga, she's taken up  a rather unusual sport.
Who she got to work with in Yellow Jackets... so many females including  Juliette Lewis and Christina Ricci. Find out what sport it revolves around.
Angie: Lost Girls is available on most streaming services.
For more information:
https://www.artists4change.org/filmprojects/lost-girls-angie/
Email ThisBlogThis!Share to TwitterShare to FacebookShare to Pinterest
Newer Post Older Post Home