Interview with Olivia D'Abo of The Wonder Years - Her New film Angie: Lost Girls is Now Streaming - Hear Ten Things we Learned About this Multi-Talented Actress, Singer/Songwriter and Voice Talent of Star Wars 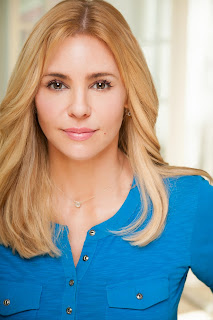 Olivia D'Abo is known to many for being Kevin Arnold's big sis Karen on the popular sitcom The Wonder Years (which by the way is getting a reboot). But Olivia D'Abo is so much more than just a sitcom icon, she's an accomplished film actress, singer/songwriter, voice-over talent (she's the voice of Luminara of Star Wars: Clone Wars) and podcaster.

The daughter of  a rock start (Mike D'Abo of  Manfred Mann) and a model (Maggie London) who grew up in England, she's lead a very interesting public and private life and has many projects in the works.

Most recently she stars as the mother of Angie, in Angie: Lost Girls, a narrative feature by Julia Verdin and Artists for Change. It's a powerful, thoughtful and difficult story about a typical suburban teenager who gets trafficked. Randall Batinkoff plays her husband, and together they to get their daughter back from some very dangerous and evil people. The movie is streaming now and you can find where here:

We had the chance to sit down and talk to Olivia. Here's the full interview:

In this interview, you'll hear:

Why she took the part in a film about child trafficking and why she could relate as a mother.

How Angie got lured into this world in the movie and how this scenario.

How she had an inkling that The Wonder Years would be big the first time she read the script, and how the music - like Steppenwolf and Joplin- was a bonus to it's enjoyability

What other popular 80's sitcoms she appeared on.

What growing up with a dad in a popular band was like, and how Elton John, Cat Stevens, Dusty Springfield and other musicians would hang out in her basement in England.

What her connection is to Bon Jovi and how you can hear it yourself.

TRIVIA: Olivia's character Karen Arnold left The Wonder Years to move in with her boyfriend on the show, played by Friends' David Schwimmer

See Her Also on The LIBBY Show: Lunch with the Ladies:

Why her family moved from "merry old England" to America and what that did for her.

What she's being doing during the pandemic- including two new films.

What her podcast Every Friday with Dan and Olivia is all about.

What she thinks - a key word and process - is what is needed to get through the changes this pandemic has brought on and will continue to.

What popular series she's been binging on lately -and hint, it harkens back to her birthplace.

To catch up with Olivia, visit: