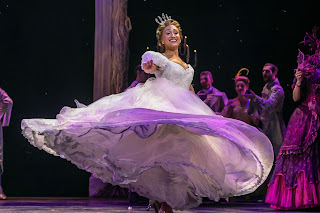 Just Be Home By Midnight.

How do you describe a performance worthy of a prince? In a word: Charming!

Paper Mill Playhouse swaps its ruby slippers for glass slippers this holiday season. Following on the heels of Chasing Rainbows: The Road to Oz, the timeless fairy tale Cinderella takes the stage with all the romance and magic you could wish for. Mark S. Hoebee, Producing Artistic Director of Paper Mill, directs this classic Rogers and Hammerstein musical with a few modern twists courtesy of Douglas Carter Beane.

As the curtain rises to a story book set of woods and cottages, the ensemble announces that the prince is “coming of age”. Billy Harrigan Tighe takes on the role of Price Topher, not only a slayer of dragons and giants but, we learn, a recent university graduate. The wide-eyed prince returns home to hear rumblings of unrest among his subjects. The royal court, led by the Prince’s advisor Sebastian, knows just how to deal with these peasants – create a distraction. Sound familiar? Christopher Sieber plays this role for laughs and often, for a point. The palace decrees that there will be a ball so that Prince Topher may find a wife. 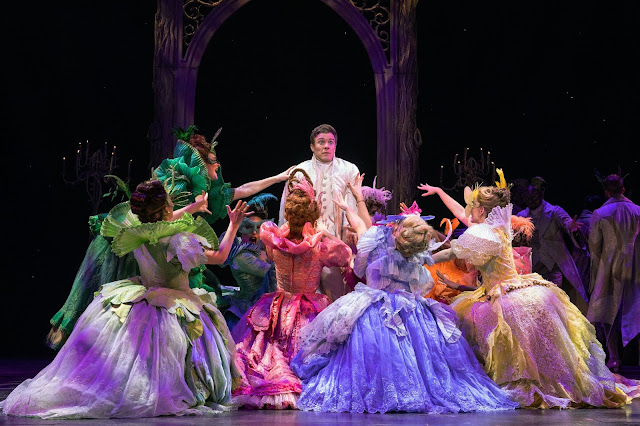 Ashley Blanchet comes from several roles on Broadway to grace the stage as the beautiful and kind Cinderella. Her angelic singing voice is no less than you would expect from a princess. Naturally, this type of goodness deserves a fairy godmother who literally transforms before our eyes from the forest hag Crazy Marie to Cinderella’s ethereal savior. Donna English, also with many impressive Broadway and Off Broadway credits, brings her rich voice to this role along with some very modern words of advice including this nugget: “Don’t wait for everything to be perfect. Just go!”

In this updated version, Cinderella’s stepmother is not so much wicked as she is desperate. Dee Hoty as Madame is clearly enjoying herself playing the long suffering mother of eligible but still single daughters. The step sisters are even likeable, particularly Gabrielle played by Rose Hemingway. To her mother’s dismay, Gabrielle does want not to marry a prince, preferring the social activist Jean-Michel. Andrew Kober’s character has a thing or two to say about social classes and inequality. Angel Lin, in her Paper Mill debut as the other stepsister, Charlotte, is hysterically awkward. 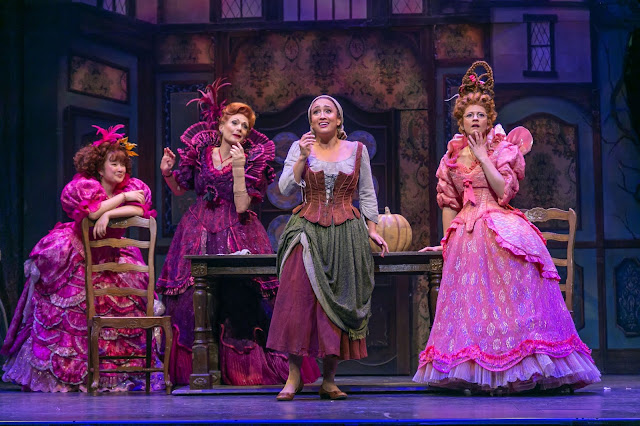 "This production neither disappoints in magic or message." - Beth Abramson Brier


Yes, there is singing and dancing and - you guessed it - white mice, adorable woodland creatures and a pumpkin that all transform into a horse-drawn carriage with driver and footman right on stage in the wave of a wand. Blink again and Cinderella’s tattered dress and kerchief become a dazzling gown replete with tiara. This production neither disappoints in magic or message. Cinderella keeps her slippers on but leaves the prince with some very modern ideas on how to be a leader. (Wanna bet this prince won’t see any impeachment hearings?) 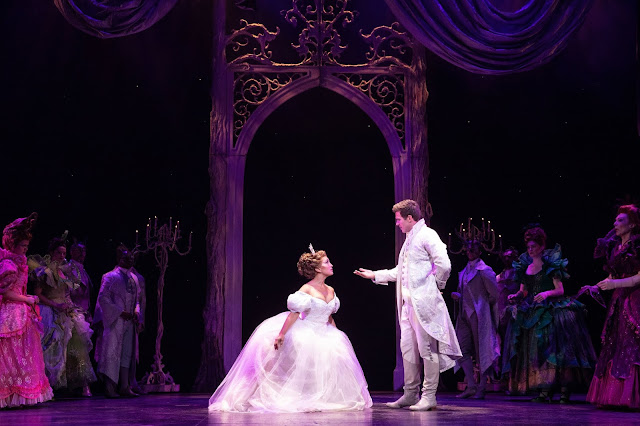 Blanchet and Tighe bring all the romance of this love story to new audiences with the blending of their mellifluous voices. Together with the leading cast and ensemble, stunning costumes, energetic dance numbers, and comedy, Cinderella is a perfect treat for the entire family this season.

Cinderella is on stage through December 29 in Millburn, New Jersey with a special Autism-friendly performance on Thursday, December 26 at 1:30 PM. And be sure to take advantage of the photo op with the magical carriage located just behind the main entrance doors. It’s all part of this festive holiday treat.