Film Review: A Beautiful Day in the Neighborhood is What We All Need Now: Tom Hanks Shines as the Affable Fred Rogers 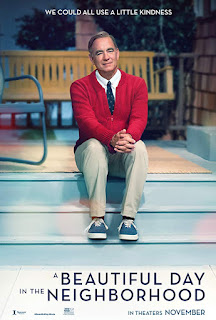 A Beautiful Day in the Neighborhood is out in theaters.

Henrietta Pussycat is my doppelganger! This may explain why I was among just seven other people at the 10 AM showing on opening day of  A Beautiful Day in the Neighborhood. The other explanation is that I wanted to see right away if it lived up to the hype - and my hope. A simple answer for a complex film: Yes.*

Tom Hanks takes on the enormity of playing not only Mr. Rogers but also Fred Rogers. Although they are separate it is almost impossible not to conflate them. The New York Times praised Hanks’ performance in a three page spread in the Arts and Leisure section on Sunday, November 17. He is that good in this role. Matthew Rhys is Lloyd Vogel, a journalist charged with interviewing Fred Rogers for an article in Esquire about heroes. Together Hank and Rhys bring you into the co-existing worlds of both truth and make believe.

The film is gentle. Like Mr. Rogers himself it is unrushed – which is very different than slow. Something director Marielle Heller understood well. The pace is the very core of the enduring success of Mr. Rogers’ Neighborhood. Hanks artfully recreates Mr. Rogers’ cadence and deliberate movements. I watched him remove his blazer and street shoes and put on his signature zip cardigan and blue sneakers, marveling that he finished just as the opening song concluded.

Fred and Lloyd spend a great deal of time talking about feelings, especially how children manage their feelings. Daniel Tiger has quite a bit to say on the subject as well. Question: Can a small, scared striped puppet find comfort in a world of emoji’s? Talk among yourselves while I go cry.


If you really want to be part of the “Neighborhood” here are a few suggestions. Before you go, read Tom Junod’s article “Can You Say…”Hero”? in the November 1, 1998 edition of Esquire, available on line. About 1 hour and 20 minutes into the film look for a surprise cameo appearance of Joanne Rogers as a diner in the Chinese restaurant. Finally, after the movie, teach someone the sign language for “Friend”.

Now more than ever at this holiday season we need compassion. We need real life heroes. ** We need neighbors. We need A Beautiful Day in the Neighborhood. We need Mr. Rogers. Or, as Henrietta Pussycat would say “Meow meow meow loved it meow.”


*A third reason is that I needed to extract myself from the sofa where I sat riveted and unmoving for hours watching the unshakable testimony of Dr. Fiona Hill.