The Time is NOW for Time's Up: New Coalition Seeks to Change and Defend the Culture of Sexual Harrassment, Reese Withersppon, Eva Longoria, America Ferrera and Growing List of Hollywood Powers Move for Real Change

Reese Witherspoon, Eva Longoria, America Ferrara, Shonda Rhimes, Attorneys Nina Shaw and Tina Tchen, are among hundreds of women who have formed Time's Up to battle sexual harassment and promote equality in the workplace.

By Suzanne Ordas Curry - Sexual harassment transcends all disciplines and careers. Soon after the Harvey Weinstein news broke and the avalanche started, a group of Hollywood women received a letter of solidarity from the Alliance of Farm Workers which in part stated:

"We do not work under bright stage lights or on the big screen. We work in the shadows of society in isolated fields and packinghouses that are out of sight and out of mind for most people in this country. Your job feeds souls, fills hearts and spreads joy. Our job nourishes the nation with the fruits, vegetables and other crops that we plant, pick and pack.


Even though we work in very different environments, we share a common experience of being preyed upon by individuals who have the power to hire, fire, blacklist and otherwise threaten our economic, physical and emotional security. Like you, there are few positions available to us and reporting any kind of harm or injustice committed against us doesn’t seem like a viable option. Complaining about anything — even sexual harassment — seems unthinkable because too much is at risk, including the ability to feed our families and preserve our reputations.


We understand the hurt, confusion, isolation and betrayal that you might feel. We also carry shame and fear resulting from this violence. It sits on our backs like oppressive weights. But, deep in our hearts we know that it is not our fault. The only people at fault are the individuals who choose to abuse their power to harass, threaten and harm us, like they have harmed you.

In these moments of despair, and as you cope with scrutiny and criticism because you have bravely chosen to speak out against the harrowing acts that were committed against you, please know that you're not alone. We believe and stand with you." 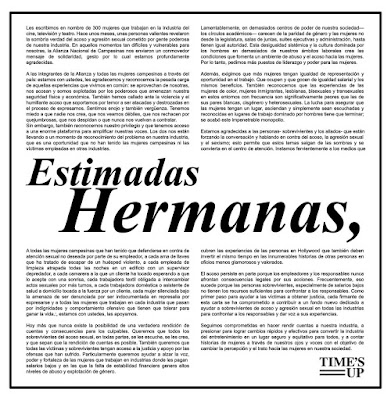 View the website -   https://www.timesupnow.com/#into-anchor
The disparity between the women in Hollywood and these workers cannot be dismissed yet the common ground is recognizable and overwhelms. Soon after this open letter was received, in the last few months of 2017, conversations among the power players of Hollywood, who were all chomping at the bit to make real change, took place and the Time's Up movement was given birth.

The mission statement is:

Powered by women, TIME’S UP addresses the systemic inequality and injustice in the workplace that have kept underrepresented groups from reaching their full potential. We partner with leading advocates for equality and safety to improve laws, employment agreements, and corporate policies; help change the face of corporate boardrooms and the C-suite; and enable more women and men to access our legal system to hold wrongdoers accountable.

The goals of this organization appear to be to:

- To address the inequality and advocate for better laws

- To provide a legal defense fund administered by the National Women's Law Center, It already has 13 million in it.

- To spread awareness, and to provide a roadmap and resources for those who need direction and help

- To bring together many different groups who will help in this cause. There are several organizations already involved and the website lists sources for help.


Many of the names are familiar. There are over 300 women and men involved so far, people in front of the cameras and behind them. The website does not list all those involved but one look at twitter and you can see who is in solidarity with the organization. In two days the twitter handle @timesupnw has over 22k followers. To name just a few who are in solidarity, Ava DuVernay, Tracee Ellis Ross, Constance Wu, Brie Larson, Kerry Washington, Gabby Sidibe and the list will grow.

What is most promising bout this organization is that it wants to reach outside the boundaries of Hollywood. It may have been started in La La Land but it truly wants to make a difference for all women.

Of course this takes money, and the legal defense fund is a major aspect of this coalition.  Right now sources cite that  it is leaderless but that will likely change. America Ferrara, speaking on the Stephen Colbert Show, made it a point to say that "the fund is for women AND men who have been sexually harassed."

Will this make a difference? This movement has just given real birth, and like with any child, progress will come in baby steps, one at a time.