Jessie Godderz, also know as Mr. PEC Tacular, most known for his time on  CBS'  hit reality show Big Brother, is now starring in the  Emmy - nominated show streaming on Amazon, Tainted Dreams. Tainted Dreams is the story of a soap within a soap and features iconic actors from daytime, reality and stage.


Tainted Dreams just debuted its second season, and in this season we get to know a little more about the background of  the hot guy that was hired to help out on the set. Spoiler alert- he's got a bit of a shady past.

Tainted Dreams marks the debut of Jessie in his first scripted role, though his appearances on Big Brother and in the ring gave him a great background for this acting challenge. 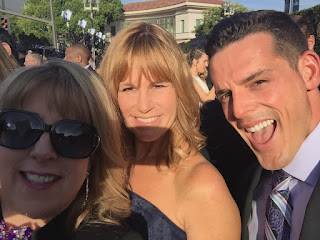 I met Jessie when he and many of the cast and crew were out at the Daytime Creative Emmys for Season 1 in Pasadena California last year. As the show's publicist, it was fun yet hectic helping get him interview aof the Red Carpet, but he was always up to talking to reporters and he always had a smile on his face. If you haven't been there, it's just crazy busy and crowded but so much fun.


Jessie was just featured in Entertainment Weekly.com  with photos of him and his new son. Congrats Jessie on the birth of  Lucas Princeton.  He also posted the photo on social media; photo


You can see Jessie on Tainted Dreams on Amazon for free  (with ads) and Amazon Prime (without ads). To watch the show click here: https://www.tainteddreams.com/