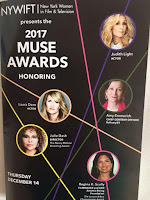 The New York Women in Film and Television held its annual MUSE AWARDS at the New York Hilton on Thursday, December 14, 2017 in New York City. On what was probably the coldest day so far in the New York City this winter, the crowded room was warm with the solidarity of women determined to cheer each other on and make this year the start of a significant change for women.


Receiving the Made in New York Award which was presented on behalf of the state of New York was actress, producer, entrepreneur, and activist Alysia Reiner. 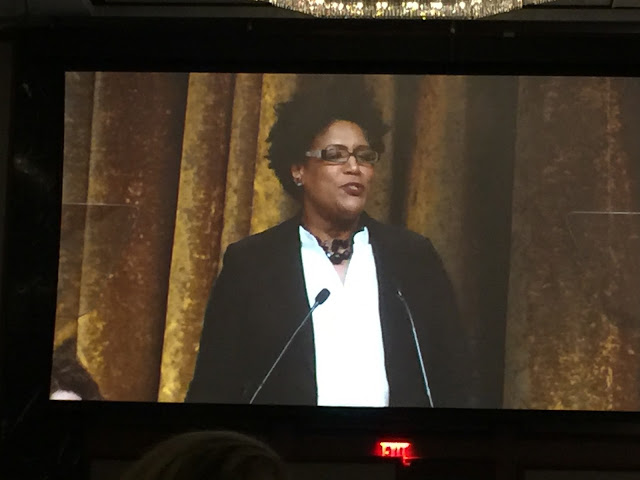 Nancy Giles was the Emcee, a fine choice as her delivery and humor were perfect for the luncheon. She started by refreshing her lipstick at the podium.

After an hour-long cocktail hour while most guests were still filing in - after all it is New York City and it was a gridlock day, the ceremony started a little after 12:30. Food was already plated, it was tender chicken breast, chick pea salad, lettuce and a cheese spread. The room was packed, in fact at my table they had to squeeze in an extra chair. I would say that over 95% of the people there were women. 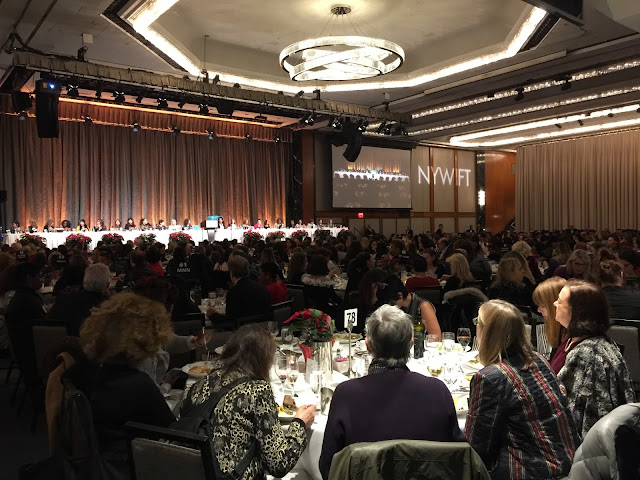 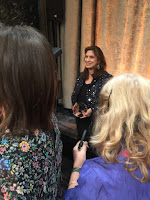 Given the environment we are living in, the overwhelming sentiment and message in the room was that this was the beginning of a new day. Regina K Scully gave a powerful and inspiring speech, highlighting facts and saying that ,"something IS changing". Many of the speakers talked not just about the changes in the entertainment industry, albiet slow, but the overall changes that should create a better working environment and hence better mobility for working women. Though there were moments of levity in the room, I felt a more serious tone in the air, that we were on the brink of a moment in history that could truly change the world for women. The Lietenant Governor said that there will be "no more degradation, so that no one will have to follow in my footsteps again". This brought the crowd to their feet. 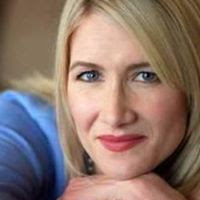 Laura Dern (most recently seen in The Last Jedi, playing a strong female leader) talked about how growing up in show business and then working on sets of her own, that she started to notice how the camera operators were all men, She was told, "if you can find me some women give me the list." She also said how she'd been in a room with actresses and when a handsome man walked in you could feel the panic. She urged the women to be beacons of light and to stand together. 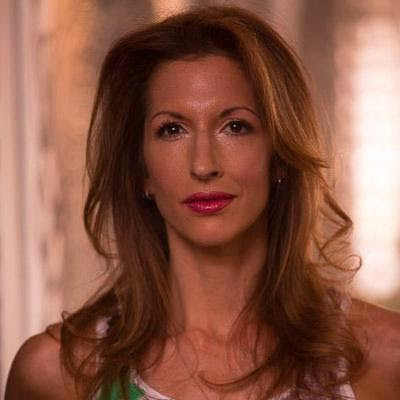 Alysia Reiner said that "we have a lot of supporting to do." She thanked the mayor's office because she could not think of any other office that is "so supportive of females in the entertainment industry
and helpful the the film industry to be so environmentally conscious." 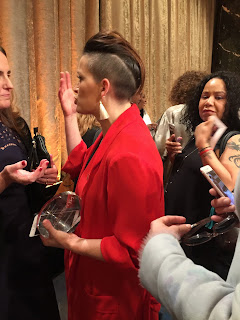 Amy Emmerling started by saying how she was in awe to share the stage with everyone on stage and in the room. She spoke about work-life balance, and then joked, but was serious, about how she was able to have that because her mom lives with her and does all the "heavy lifting."

She spoke of the disruptive nature of social media. She spoke of  how at Refinery 29 they encourage women to tell, share other women's stories in a variety of channels and mediums. She said how they  need the voices of all women - , plus size, trans, all kinds to tell their stories. She said "we need to work together to put our most compassionate best selves together to create a movement". She said that the "#metoo movement was not just about sexual harassment ", but that it was a movement.

She noted how she did not look like the typical executive, but it didn't matter. She said "leadership is putting other needs before your own" She said women need to grasp more opportunities, saying it's not about "grabbing hoo-how but  grabbing power" and taking the opportunity so females become the gatekeepers, as she had realized that the culture, the shows, she grew up with - were all greenlit by men. 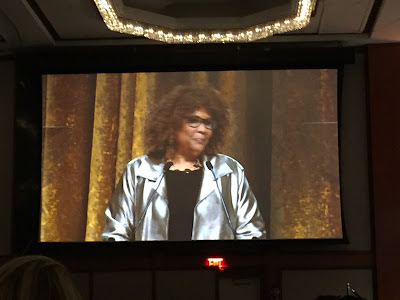 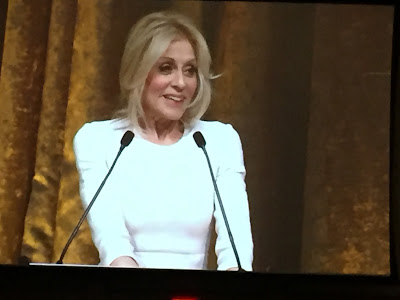 Judith Light  stated that "we are awake now in a way we have never been before and we have infinite stories to tell and now the whole world is listening.....  Now is our moment. It is our collective voice that is the muse for our time."

I spoke to Judith about her role on Who's The Boss, which was referenced several times to her, and she said that "she was glad and proud  that she was able to provide a role model like that "but that she didn't  realize it at the time."

For Videos of this Event visit:
https://www.youtube.com/watch?v=SmW6GjDO5dM 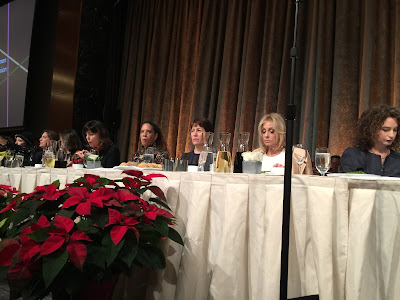 She also talked about the arts, the diversity and the reach. She said, "we are graced by our connection with each other.. we reach out to people all over the world." She noted, "It is the arts that lift, and educate and illuminate a culture."

Nancy Giles ended with a story about how you should "never lose your story.", talking about how in some indigenous cultures, being sick translates as "losing your story." "Tell you story" she added.

I was a newcomer to this event, but I left with a sense that there really was change in the air. Everyone kept saying how they didn't want future generations of women to have to follow in the same footsteps as they did. I would imagine that many of the women over a certain age in the room grew up with Angela Bower as a role model and dreamed of being a career women, having it all, with a family. But the road to this is bumpy with lots of twists, turns and potholes. 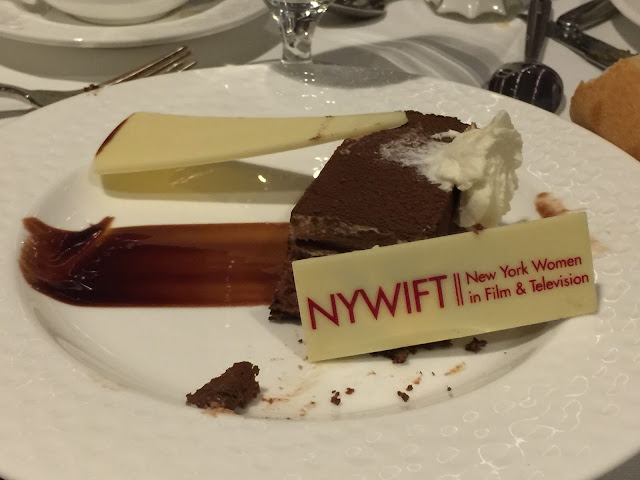 Having worked my whole life, I also had "me too" moments in the workplace. The leaders in this room need to continue to speak out, in fact, every women needs to lead the way. Women from all walks of life and careers will need to take a stand and do something to promote change, whether it's a big or little step. Attending an event like this is just the start. But it can and will be done.