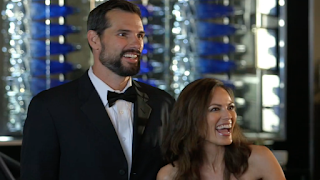 (Press Release) Coming to the Ridgewood Guild International Film Festival on Wednesday, April 26th is the soap within a soap, Sonia Blangiardo's Tainted Dreams This immensely popular Amazon Series will be shown at 7:10 pm at the Ridgewood Bowtie Cinema, 190 Ridgewood Avenue in Ridgewood, NJ (half hour from NYC) as part of the growing festival. One episode will be shown and there will be a Q and A with the actors immediately following.

On the Red Carpet will be Austin Peck (Tainted Dreams, Days, ATWT),  Tonja Walker (Tainted Dreams,, General Hospital, One Life To Live)  and Erik Ransom from Tainted Dreams. Terri Conn (One Life to Live, As The World Turns) will also be gracing the carpet.  The Red Carpet is outside the theater and is a free event. The ticket for the evening is $10 and gets you into any of the films being shown that night. Tickets are available at the door that night.

Tainted Dreams has been nominated for 5 Daytime Emmys. This dramedy captures the goings-on behind the scenes of a soap opera, and features many iconic and familiar faces from the soap world, reality and theater including RHONJ Dina Manzo and Jessie Godderz of Big Brother. It is available for streaming for free on Amazon.