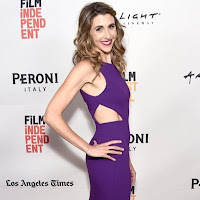 Sarah Megan Thomas, producer and star of Equity the Movie, will be appearing on the Red Carpet at the Ridgewood Guild International Film Festival at the Ridgwood BowTie Cinema on  Wednesday, April 26th from 6- 7 pm. She will be there for a screening of her movie, Equity, and will be part of the Q and A following the movie. The theater is located at 190 W. Ridgwood Avenue in Ridgewood, NJ.

The movie will screen as part of the festival at 7:40 pm. There is no charge for the Red Carpet. There is a $10 tickets charge to get into
the festival which is an all-access pass for the whole night of films, features and music. Tickets can be purchased at the door.

Sarah Megan Thomas plays Erin in Equity, a rising star in the investment banking world who will stop at almost nothing to make it to the top. She plays Vice President to Naomi Bishop, played by Anna Gunn. The film chronicles an IPO for a tech company, It's full of twists and turns and gives a rather real glimpse into the competitive nature of Wall Street, The film has received accolades for its representation of women in the workplace and has recently won Best Screenplay at the Women's Image Network Awards in Los Angeles. The movie premiered at Sundance and was bought by Sony Pictures Classics. It can be seen on-demand and on Starz. It is also available on DVD and Blue Ray.

Sarah is no stranger to film. Her first movie gave the world a glimpse into the world of competitive crew. Called Backwards, Sarah stars along with James Van Der Beek. Sarah wrote and produced Backwards. This movie chronicles the rise of an ambitious female crew champion who finds not just awards but love and contentment in her journey to the top.

For an exclusive interview with Sarah click here:
http://www.suzeebehindthescenes.com/2016/12/females-in-entertainment-interview.html