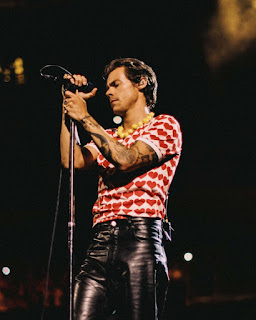 Pop megastar Harry Styles headlined a "One Night Only in New York" show at the UBS Arena on Long Island on Friday, May 20, which was an incredible and high-adrenaline event. He performed for approximately 20,000 New York fans, and it was live-streamed all over the world in over 150 countries. It was in support of his newest musical effort, "Harry's House."

With this special show, Styles performed his latest studio offering for the first time ever.

These pop-up shops afforded his fans with the privileged opportunity to experience and celebrate "Harry's House" with special activations and exclusive merch designs that were only available at those aforementioned locations. These items include specific city album box sets, limited album zine, T-shirts, hoodies, towels, hats, and totes.

YOU MAY LIKE: New Music from Artist Libby Jade:
https://linktr.ee/libbyjade

The British pop heartthrob began his set at the UBS Arena accordingly with "Music For a Sushi Restaurant," and he had the crowd with him from the opening verse. He went on to play his entire "Harry's House" record from "start to finish," the way his album was intended. It was followed by the softer tunes "Late Night Talking" and "Grapejuice," both of which were well-received.

Styles greeted his Long Island audience, as well as the viewers that were tuning in from all over the globe (via the Livestream), and he told them that their job was to have as much fun as they possibly could. He went on to share stories about how several of his songs came to be.
You May Like Markos Papadatos' Review of Olivia Rodrigo Concert:
https://www.suzeebehindthescenes.com/2022/05/concert-review-olivia-rodrigo.html
Harry picked up the pace with the up-tempo and high-octane "As It Was," and continued with "Daylight" and the ethereal "Little Freak," which was worthy of the repeat button.
Styles was impressed with the fact that his fans knew the lyrics to his new songs even though the album was released earlier that day.
Equally beautiful was his rousing rendition of "Boyfriends," as well as "Love of My life." "Matilda" truly tugged at the heartstrings. For Styles, this album was his saving grace over the last couple of years.
Of course, no Harry Styles is complete without his popular hits such as "Adore You," the irresistible "Watermelon Sugar," and he threw in his own distinct cover of "What Makes You Beautiful" by One Direction (the pop group that catapulted him to worldwide fame).
A moving moment in his show was when he felt up the Ukrainian flag over his head in solidarity during his performance of his smash solo single "Sign of the Times," which was fitting and appropriate. He finished his show with "Kiwi" and yet another reprise of his Billboard Hot 100 chart-topper "As It Was."
Styles expressed his love and gratitude to his fans that came out to see him tonight, and proclaimed this evening as "the best night of his life."

In summation, Harry Styles was able to morph the UBS Arena in Elmont as Harry's House. It was a place where his fans felt welcomed, accepted, and appreciated. It was both a liberating and exhilarating live concert experience. This "One Night Only in New

In summation, Harry Styles was able to morph the UBS Arena in Elmont as Harry's House. It was a place where his fans felt welcomed, accepted, and appreciated. It was both a liberating and exhilarating live concert experience. This "One Night Only in New York" concert garnered two giant thumbs up. Bravo Harry.