The Libby Show: Lunch With The Ladies is a New Talk Show for Ladies Of a Certain Age - See Sneak Peak Now on Youtube 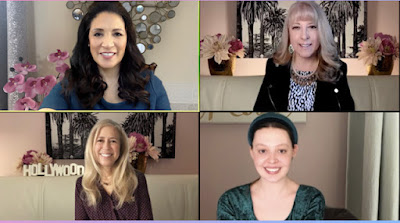 Update: With a soft launch in April 2021, the first ten episodes will officially launch on December 1, 2021 on the official Youtube Channel.
https://www.youtube.com/channel/UCgVU40peyhgLAYQ00x9UjMQ/featured
There's a brand new talk show in town. But this one's unique. It's a talk show for ladies over a certain age. Yup, ladies with a few wrinkles and grey hairs.

The show will feature five co-hosts, Suzanne Ordas Curry (a film producer), Beth Abramson Brier (a screenwriter), Iliana Guibert (actress/filmmaker), Messalina Morley Alton (actress/screenwriter) and Zonie Le Sane (professional).  The press release states that all of the hosts are over a certain age, but one of the hosts will always be a tad bit younger to keep them all current, because the beauty of being older is that although you know a lot, you also realize there's a lot you don't know. For example, one of the segments will be "Who is this?", where the ladies try to figure out who people are (think musical guests on SNL!)

Topics will include entertainment, families, shopping, arts, music, film, children, causes, aging, Broadway, health, the environment, living and more. The show's goal is to "talk about topics that unite us". There will be little political talk.

Guest co-hosts will appear throughout the season. Guests will include well-known actors, doctors, wellness specialists, filmmakers, non-profit pioneers, life coaches and other professionals. The show will also feature real woman talking about their unique experiences in life.

The first guest will be actress/filmmaker Cady McClain. The show will have a soft launch on Youtube in June 2021. You can subscribe to the channel The Libby Show: LunchWithTheLadies on Youtube. It will also be available on other platforms in the coming months.

Suzanne Ordas Curry, who also serves as Executive Producer, states, "I am surprised that there is no show right now, that I can think of, that serves this audience. We're not boomers, but we're not millenials. We have spending power and our voices matter. We hope to connect, inspire, empower, inform and entertain people of all ages, but especially women in the middle of their lives." Just call us LIBBYS - "Ladies Living in their Best Years."