Review of Finnerty Steeves' Feature Film Before/During/After: An Honest and Visually Appealing Story of a Marriage Gone Awry and the Hope for After 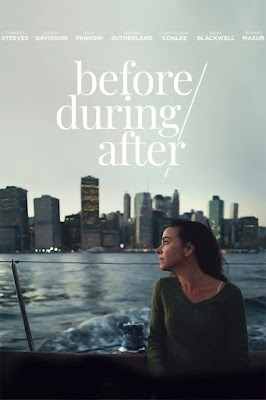 I just wanted to tell her it was all going to be okay.

Finnerty Steeves' first feature film, Before/During/After, is inspired by the consequences of her choice of a mate in her own life. Finnerty is an actress best known for her role as Beth Hoefler on Orange is the New Black.  With this feature she is not only acting but also writing and producing. Before, During and After is a dramedy set in New York City. With more drama than comedy, it works well as the subject of the film - the dissolution of a marriage- is quite heavy. It's still an engaging, easy-to-digest movie.
IN THE LA AREA? See a special screening of before/during/after at Hollywood's Chinese Theater on 9-9-2021.
Finnerty plays a struggling, no longer twenty-something actress named Jennie Lonergan who we will have more and more empathy for as the movie proceeds. When the movie begins, we see her auditioning for a part in New York City where the movie takes place. We experience the cutthroat world of auditions through the eyes of the protagonist (pre-pandemic anyway, when auditions were largely in-person) as she walks into a room of look-alikes all wanting the same, scarce role, We've seen this exercise portrayed in La La Land, it's a tough job to be an actor and requires a very thick skin. It also requires an ability to get along with your competition. It's just business, as they say.
These character traits come into play as we see the situations Jennie finds herself in throughout the movie. In a series of flashback stories, we see the pattern of her relationships in her life. We see hope for the future and and we see despair. We see the love that was the cornerstone of the marriage. We see the affair. We see her friends that want to help her and we see professionals who do just the opposite. We see the support of her parents. We see her struggle with infertility. We see a marriage dissolve.
In a tribute to casting, what we also see are a lot of well-known faces which is always a plus. I think what makes indie movies so interesting is that you'll see an actor you recognize surrounded and supported by up and coming actors. Keep an eye out for John Pankow (Mad About You), Marin Hinkle (The Marvelous Mrs. Maisel), Kristine Sutherland (Buffy), Miriam Shor, Richard Maser and many more.
This movie strikes a feminine note. We all know people who have had to experience the pain and trauma of a relationship ending. Support from friends, especially girlfriends is very important. This story is one of strength, patience, understanding, perseverance and finally moving on. I think some of the dialogue may be lost on some men, but as the writer, Finnerty lets us hear exactly what was going on in her head at the time.
Now more than ever, I also appreciated the setting of The Big Apple. I especially appreciated the boating scenes on the river, both aesthetically and for its meaning. First, water activities area a growing activity around NYC and not many movies have showcased this nor the first-class marinas). Second, the smooth-sailing carefree life of the husband was in stark contrast to the busy, hectic life of his wife.
People change, people want different things in life,  and people grow in different ways as they go through life.
And people grow apart. That is what this movie so honestly portrays, It just happens.
Special shout out to the many women behind the scenes. This movie was made with the help of many NYC based producers and talent including Jamie Zelermyer (Executive Producer), Elena Berger-Melman (Executive Producer), Elizabeth Krajewski (Executive Producer) and Katie Hyde (Producer).

This movie was released during the pandemic
and can now be seen on many platforms.
For More Info:
https://beforeduringafterthefilm.com/
Email ThisBlogThis!Share to TwitterShare to FacebookShare to Pinterest
Newer Post Older Post Home