Movie Review of JoJo Rabbit: A Satire Done Right and Here's Why 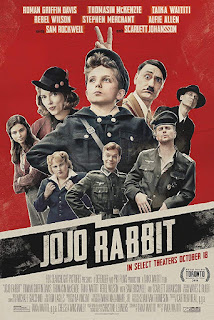 In the opening scenes of JoJo Rabbit, I must admit that I found myself in a state of disbelief.  I couldn’t believe that I was watching a satire, where the principal character, JoJo, adores and idolizes Hitler. One can imagine the initial conflicting feelings that were swirling around in my head as the film started. Is it alright to laugh at what I’m seeing? Will there be an abundance of humor in this film?

I was thinking in the theater as the film started that Taika Waititi, a man known for his humor, shouldn’t include too many jokes in the movie, because otherwise, it could come across as a movie in which the audience is on Hitler’s side, laughing at his jokes, finding him to be a funny man. The answers to my questions were yes, it is alright to laugh because no, there won’t be an abundance of humor. Although it might not seem like it at first, JoJo Rabbit is an immensely successful film because it does what a satire is supposed to do.


Satire is not a well known genre.  It is also rarely executed successfully, because humor is often injected too much into the body of work, losing the bigger message. So what, ultimately, is the purpose of a satire? The purpose of satire is to laugh a little bit, that is true, but it is also (as the actual definition states), supposed to “expose and criticize people’s stupidity or vices, particularly in the context of contemporary politics and other topical issues.”  A satire is ultimately supposed to be a mixture of humor and social commentary and although it features brilliant cinematography, magnificent acting from its adults and impeccable direction from Taika Waititi, the success of JoJo Rabbit ultimately is in it’s perfect amalgamation of comedy and social commentary; a satire done right.

JoJo Rabbit is split almost perfectly into two acts. Act One is hilarious and shows great development of its characters. The humor is played out perfectly in the first couple of scenes that take place at the Hitler Youth Camp. From the throwing of the stielhandgranate that bounces off of a nearby tree, to Jojo’s adorable best friend played by the mature scene stealer, Archie Yates, each of the little skits in this bit are highly amusing.

Two  other great moments in this energetic, entertaining first act include anything with Captain Klenzendorf, played by Sam Rockwell and Hitler himself, played to great effect by Waititi. Honestly, if it weren’t for the fact that this movie was dubbed as a satire, I could have just as easily watched two hours of Waititi cracking jokes as Hitler, but like I said, I would end up feeling wrong about watching something that idolized and glorified such a ruthless person. With that in mind, let's discuss Act II,
the real reason why JoJo Rabbit is such a great film.

There is a certain point in the film where the tone drastically changes. It won’t be spoiled here, because the individual viewer has to have the same moment of immense joy and satisfaction that I did as I found the true point or theme, if you will, of JoJo Rabbit. Waititi brilliantly chooses to tell the story through the perspective of an innocent, naive child, who has no frame of reference of what the real world is like. He learns, sadly, not as a student would learn out of a history textbook, but in real time, the atrocities of this war,  as they are happening right in front of him.

At first, he chooses to side with Hitler because his only perspective of this imaginary friend is one who tells jokes and gives him advice, which has been imprinted upon him from the Hitler idolizing people around him. Sounds like a great time, doesn’t it?

But as JoJo grows up, he discovers that his mother is hiding a Jewish girl by the name of Elsa and gradually develops a friendship with her, first to obtain information on what the Jews are like, then in so doing, he actually learns from her that Jews are the same as anyone else. He starts to doubt Hitler and the Aryan ways and learns true acceptance. That is ultimately the theme of JoJo Rabbit; that anyone, of any stature, race or ethnicity can be a hero. All the person has to do is have love and acceptance  for the diverse people that make up this beautiful world. Waititi ends the Hitler story by quite literally kicking him out and with JoJo learning the errors of the Nazis, thus completely terminating all beliefs of mine that this would be a simple, humorous film. 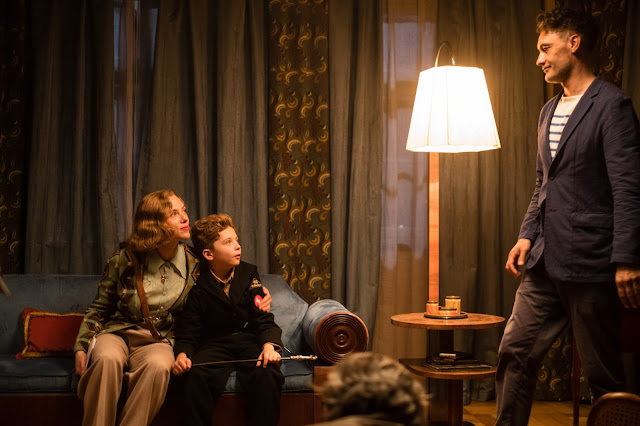 Additionally, it is a very risky thing to rely almost entirely on the perspective of a child to make a film work. It is something rarely done and depending upon the actor, his performance might ruin the movie. The two leads, Roman Griffin Davis  (JoJo) and Thomasin McKenzie (Elsa), to me, are the standouts of the film. Every line they deliver, every facial expression that appears on their faces and just about everything they do in JoJo Rabbit is representative of how mature and dedicated they are to the material. As actors in this film, they pretty much do a better job than the adults do in their roles. It fell on their shoulders to make sure that JoJo Rabbit’s main theme was conveyed and they succeeded. As if that was not enough, the accomplished leads close the story with great depth of emotion and bring the theme of acceptance and being a hero home.

The last scene, where the phenomenal Roman Griffin Davis and Thomasin McKenzie dance to Heroes by David Bowie fits like a glove and is one of the only scenes in film that has ever made me cry. Hilarious, melancholy, endearing and an impeccable story of heroes, acceptance and hope, JoJo Rabbit is one for the ages.