Winnie Cooper: Danica McKellar is the Definition of Sweet Success - Get to Know More about this Charming and Smart Christmas Movie Superstar (Includes Video) 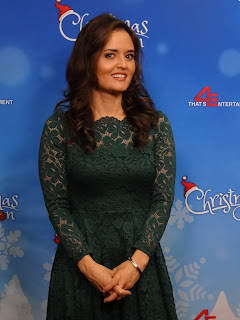 Danica McKellar is sweet. Sweet, successful and hardworking. We believe her in all her her roles, from girl-next door to princess, from child actress to adult leading lady.

I had the opportunity to meet Danica at the press block for Chistmas Con 2019, the first ever - and sold out I may add, convention devoted to Christmas and more so Christmas movies in Edison NJ. Dancia took the time to talk to all the reporters there. She was decked out in a beautiful, understated green lace dress - perfect for the event and perfect for Christmas. Any red in it would have been too much, it was just the righ amount and the right color green (evergreen) to subtly indicate Christmas.

Yes, this lady is now synonymous with Christmas. Though for those of us who grew up watching her on the small screen on The Wonder Years, she will always be Winnie to us, she plays her parts on her Christmas movies flawlessly. In each role she takes on a new character and defines herself as it.
Danica has been in many Christmas movies, such as A Crown for Christmas, Christmas at Grand Valley, Coming Home for Christmas, My Christmas Dream, Love at the Christmas Table and this year's Christmas at Dollywood. She's also been in countless TV series and movies since 2003 and has
writer and producer credits to add to her on screen career.

My favorite movie in which Danica McKellar starred is  A Crown for Christmas. I can watch that every time it is on, and I think it's been on over a dozen times on Hallmark already this season alone. It's such a Cinderella story but I can't help myself. I will never tire of seeing her in her red gown at the top of the grand staircase waiting to be introduced at the ball. Pure Hallmark magic. 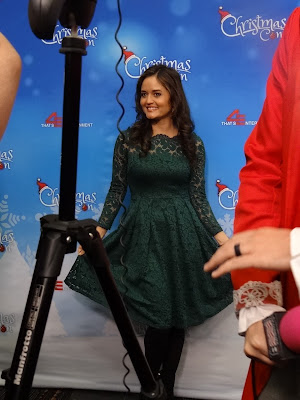 During Chrstims Con, there were over a dozen stars of Christmas movies, mostly seen on Hallmark but many of them also star in movies on Lifetime and other platforms. The way it was set up was that the actors all had their own booths, and people could line up to take a selfie with them and chat. All of the actors took the time to pose with each fan and say a few words to them. Danica's line was always full of fans. There were several panel discussions with sets of actors througouth the day, providing fans with lots of trivia to take home.

For more on Christmas Con:
https://www.suzeebehindthescenes.com/2019/11/christmascon-2019-day-3-busiest-day-of.html

At the early morning press briefing, I asked Danica what her favorite Hallmark movie was. Her answer, the newest one with Dolly Parton, Christmas at Dollywood.

Favorite Location She Filmed In

"Dollywood is a magical place. There's something magical about it. I think it's her spirit, her heart. it's all around. There are inspirational quotes everywhere. Dollywood is probably my most favorite location I have shot in." She added, "I'm high on Dolly right now."

"Frosting cookies, decorating, and stringing popcorn  - because you can eat when you do it.'


How She Cries
(though there's not much crying in Hallmark films)

Danica talked about how it is hard for young actors, as well as herself when she was young, to get herself to cry. She talked about how when she was younger she did a play in San Diego that required a lot of crying. She said how it is a struggle generally speaking for younger actors to be able to cry when needed. But, she said, drawing from experiences in the world, she found that place "physically inside her body" that enables her to do this. Then she talked about a trick. She takes out one contact, so the world is  "like a bubble",  which helps her be in that place.

Danica mentioned during a panel her #McKellarMotivationalMondays. Check these out on her social media. In her last story, she talked about kindness and helped viewers learn some relaxing breathing techniques.


She Loves Math.. and is really good at it.

According to her website, Danica is "Co-author of a ground-breaking mathematical physics theorem which bears her name (The Chayes-McKellar-Winn Theorem)."