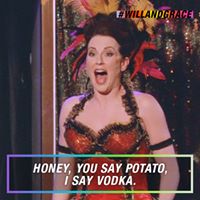 Snark is back and it is the new black! In the wake of the last twelve months this should not come as a surprise to anyone. If it does- say, you were lucky enough to have spent the last year meditating in an ashram or perhaps trapped in a cryogenics lab- message me offline and I'll fill you in. You won't believe it!

But back to snark. Or, more precisely the return of Will and Grace. And Karen and Jack. As if no time has passed, Eric McCormack's Will Truman and Debra Messing's Grace Adler pick up (almost) right where they left off with a breezy familiar banter. And while Megan Mullally delivers Karen Walker's sassy lines without missing a beat, it’s Sean Hayes as Jack McFarland who brings on the snark. Sass? Snark? Aren't I just parsing words? Exactly. Snark comes from a deeper place. It’s more heartfelt than sass and even sarcasm. It’s Jack telling us that after all these years he can’t believe he is dealing with the same old same old. That it’s okay to deny him cake. In the years between WAG 1.0 and 2.0 we had The Big Bang Theory’s snarky Sheldon Cooper. Misunderstood, confounded and possibly undiagnosed (although his mother had him tested), Sheldon serves up the snark. Faced with a new world of alternative facts, climate deniers and flat-earthers, what else can a brilliant scientist do but be but snarky?


Young Sheldon, this season’s spin-off prequel of TBBT, introduces us to Sheldon as a child. Before he was snarky- before he had to be snarky- Sheldon was endearingly funny and observant. Iain Armitage’s Sheldon is, for now, safe under the wing of his mother, Mary played Zoe Perry. Fast forward two decades and even Mary will show her snark.

I’m going lowbrow here but it’s been thirty years since Roseann’s snarky attitude gave us a glimpse into her struggles . So this season welcome back Will and Grace and hello Young Sheldon. At least for now snark is here to stain a living room near you.


Next time it comes around you know what it will be. Wait for it.. Snarknado.