Bill and Willie Geist's Book Good Talk, Dad Explores Father-Son Relationships with Humor and Wit: It's The Geist Story on Growing Up in Jersey

“Ask him!” Bill Geist said to me as we chatted about the new book Good Talk, Dad, that he and his son had written.  The place was Books and Greetings in Northvale, NJ, a bookstore just few miles from their hometown of Ridgewood, NJ.  We were talking about his chapter on his time in and I mentioned to him how my dad was in WWII but barely spoke of it.

"Ask him!", he said.  I told him how I had a friend who was writing a book on WWII and I did manage to get some answers out of him, but then he got tired of answering.

Bill Geist then asked if my dad had been to the memorial down in DC. I told him how he wasn’t exactly mobile, being close to 90 years of age.

"Tell him they’ll put him in a wheelcahair,and fly him over,” he added.

I go to a lot of books signings. To me it’s not just about the book but the experience of meeting the authors. Willie and Bill Geist are just, in one word, genuine people.

To start off the night Willie gave a short presentation on the book. He had the crowd of about 75 on a weekday night, sighing and laughing. After the presentation the people lined up in the busy and book-filled bookstore to have their books signed. The two of them took time with everyone that bought a book. I cannot say that of every author I have met.

When I got to the front of the line, I mentioned to Willie that I was in PR and that when I sent him emails he would always respond. (That doesn’t always happen with PR people!). So I thanked him. He remembered the emails and specifically an invite, one that had to do with an event in his hometown of how he wasn't able to make it the night of the event, but said, “I always like to help out people in , especially Ridgwood.”

You can tell Willie had a great, normal childhood, despite the ups and down almost every family has, some more than others, growing up in suburban . If you’re not familiar with Ridgewood, it is a very close-knit town, actually a village. It has beautiful homes, including lots of very picturesque older ones, tree-lined streets and a downtown shopping and eating area that has events and parades and attracts visitors from the surrounding towns.

It’s against this backdrop that most of the book is told.  The book called Good Talk, Dad is supposed to be ironic in that there were so many topics that his dad should have, but never really sat down and talked to him about. But as you read the book, the irony is really that Dad didn’t need to give him those talks. His instruction, guidance and love was shown to him by example in all the normal and not-so normal day to day interactions of a loving, caring, stable family. 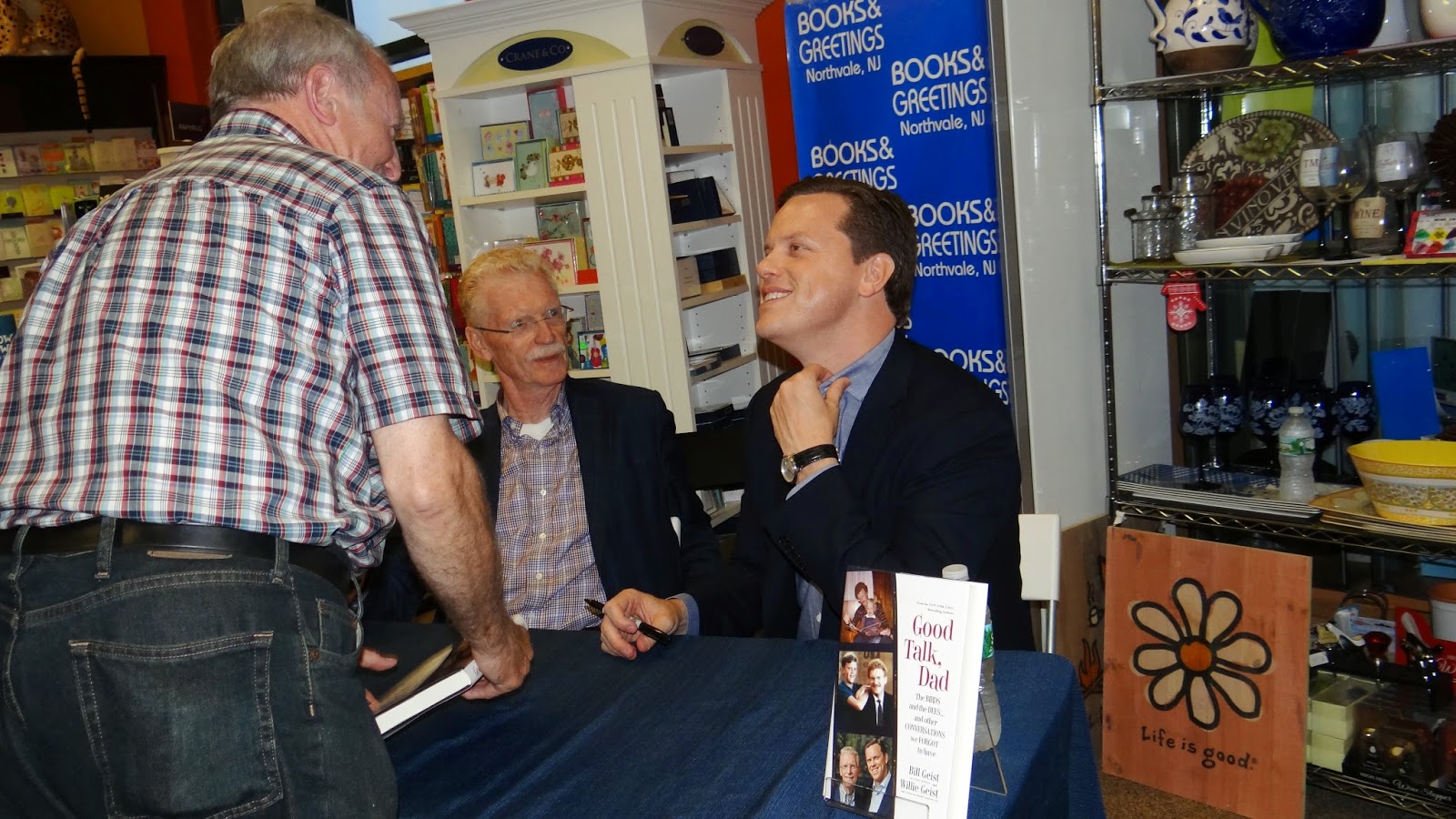 There are stories of family get-togethers, vacations, important moments and life-changing events. The book is really biographical for Willie because when he recounts times in life where his father did not verbally tell him what he thought he should be telling him, he sets it up against a very detailed backdrop and history of that period of time.
Wilie is a busy man now being a host of the third hour of the Today Show and co-host of MSNBC's Morning Joe. I asked him when he had time to write the book. “That’s a good question” he answered. "I don’t know, weekends?" Dad Bill Geist, another busy man most well-known as a correspondent for CBS Sunday Morning, piped in “Vacation- you were writing on vacation.”

readers will love all of the references. I know almost of the places and stores he referenced. I also understood his explanation of what it takes to be a Mets or Yankees fan because well, that’s just second nature in this neck o’ the woods. 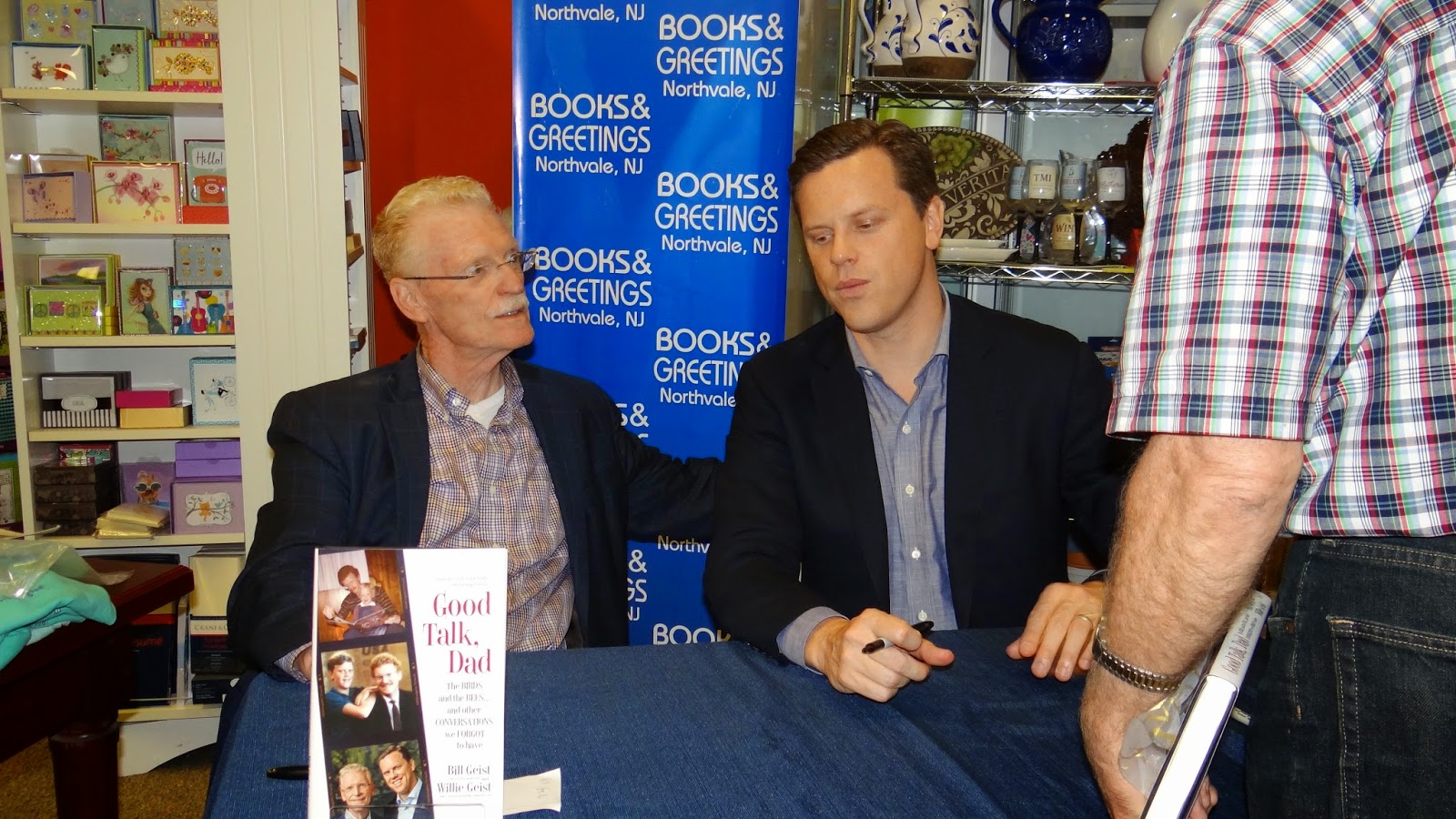 One of my favorite chapters, aside from the baseball one entitled "Baseballs, Fathers, Sons... And All That"   was when Bill recalls some of the time he served in Vietnams as a combat photographer, for which he received a Bronze star.

On the Today Show, Willie told Kathy Lee and Hoda that he had always wanted to hear more about his dad’s time in the war, but that he never spoke about it. “Then one day the chapter just appeared in my inbox”, he said.

It is truly amazing to me how people can give such accurate accounts of things that happened years ago. Of course, it’s the life-altering events that create those indelible impressions on our psyche and probably why the details arise to the surface so easily when needed. His chapter on ends with, "When I see TV commercials using patriotism to sell military service to impressionable young men and women, it seems there really ought to be the voice of that announcer in pill commericials warning, "May cause neuroses, psychoses, severe burns, paralysis, loss of limbs, premature death, and lifetimes of sorrow." My dad, the WWII vet agrees, but puts it more succinctly, War is Hell.

Another chapter, one I skipped ahead to read was the one about Bill’s Parkinson disease and how he told his family. Very few families escape some kind of  illness like this, whether it be cancer, stroke, or whatever. It’s all about how one deals with it. Bill is in the public eye and one would think that would make it more difficult. Well it did and it didn’t. He had to deal with all of the suppositions, but when it was revealed he had a world of support, not just from his family but from complete strangers. And he has not let it stop him. Case in point he was doing this book tour.

With Michael J. Fox leading the way, this is a disease that has taken on a new reputation, and hopefully a cure and better management is on the way. To learn more about Parkinson’s disease or to donate visit: https://www.michaeljfox.org/

This book is a good read, nothing really heavy and with humor throughout which even softens up any hard topic. Yes it is the story of one American family but the common link is that it shows the love and the connections between a father and son.

I think the message of the book is not just the Geist family story, but that there are so many moments that go by that it is important to record them and treasure them. In this era of Snapchat and 7 second videos recording basically nothing important, one should stop and take the time to review and document what really is important. Whether in a book, on paper, or on video, take some time to record some family history, especially before your loved ones are gone.

Bill’s words of advice from a child to a father (or any loved one) should ring true for all, "Just ask him.”

Want more Willie? Willie makes an appearance on Jack Curry of the YES Network's JCTV to discuss baseball, the Yanks and other aspects of his life. Click on the video still below or this link:
http://www.myyesnetwork.com/16197/blog/2013/09/11/jctv,_episode_17:_willie_geist