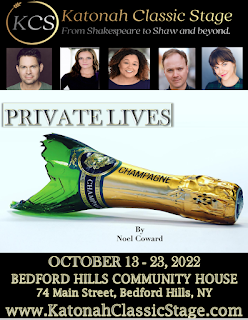 After last year’s successful run of their inaugural production, Oleanna, an intense but exhilarating drama with #MeToo undertones, KCS, the only professional theater company in Westchester County (north of NYC) is taking a decidedly more lighthearted approach this year. Instead, passion, laughter, romance, and love set the stage for a far more comedic battle of the sexes.

Founded as a nonprofit organization in 2019, KCS hoped to produce Private Lives in both the Fall of 2020 and 2021. However, due to Covid-19, KCS had to cancel both productions and downscale cast sizes considerably. Since pandemic restrictions have lifted, KCS has been going full steam ahead mounting Oleanna, hosting several readings featuring Broadway’s best and brightest stars, holding their first Shakespeare-focused workshop for local students, and hosting their third annual short film festival at the Bedford Playhouse this summer.

Set against a boozy, 1930’s backdrop, divorced couple, Amanda and Elyot, find themselves unwittingly thrown together in Coward’s classic comedy of manners. Unknowingly booking adjoining rooms while on honeymoon with their respective spouses, Victor and Sybil, Amanda and Elyot are forced to face their true feelings for each other.

KCS feels fortunate to have Broadway veteran and KCS Associate Artist, Christa Scott-Reed, at the helm to direct. Scott-Reed is similarly delighted to be a part of the production stating, "I’m looking forward to directing Private Lives with such a stellar cast. This hilarious classic manages to be timeless not because it's traditional but because it’s so delightfully transgressive. As two square pegs in the round hole of 1930s society, Elyot and Amanda push against norms AND each other, gleefully using their acid wit to make verbal fireworks spark in this summer comedy. I feel certain that Westchester audiences will delight in this charming play that is as effervescent and delicious as a glass of Champagne - but one that has some bite to it."

Emmy-Nominated Trent Dawson and the Cast

KCS Founding Artistic Director Trent Dawson will be playing Elyot. Dawson, an actor and director, best known for his long-standing, Emmy-nominated role on As the World Turns, has been working on television and on stage for nearly 30 years. He and his creative team chose Private Lives for the 2022 Fall production and he couldn’t be happier that the production is finally coming together, “This is such a fun show! I've wanted to bring this play to the community for so long, and now to do it with such a fantastic creative team is a dream come true. We all need something fun and lighthearted to look forward to after the last couple of years!”

You May Like:
Trent Dawson and Christa Scott Reed on The LIBBY Show 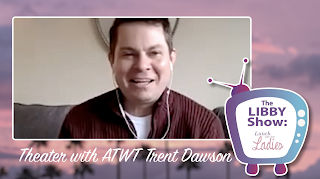 Joining Dawson will be Lea Dimarchi who gave a tour de force performance in KCS’s production of Oleanna, and a talented local actor, Dawn Vanessa Brown. Rounding out the cast is Broadway veteran Jonathan Fielding along with playwright and prolific stage actress Brenda Withers.

Bedford Town Supervisor Ellen Calves is particularly eager to showcase the new look of the Community House, “We are looking forward to this live theatre production coming to the beautifully restored Bedford Hills Community House this fall!  We are fortunate that Katonah Classic Stage is breathing theater life back into our town and thrilled to be partnering with them on this endeavor.”

There will be a preview on October 13, 2022, and the show officially opens on October 14, 2022. KCS will host a celebratory Opening Night party immediately following the show. The party will transport the audience to a 1930’s dance hall by showcasing the Art Deco décor of the period with big band and swing music, food, and lots of champagne.

Casting and other Opportunities for the Season

The 2023 season of KCS is currently in development. Dawson and the KCS creative team aim to provide seasonal, professional productions of classic plays in Northern Westchester, cultural enrichment events like the KCS Film Festival and play readings, and they will continue to grow their educational programs with an emphasis on Shakespeare and other master dramatists. Staffing, casts, and crews will draw from the exceptional talent found locally as well as New York City and the tri-state area.

Tickets:            On sale now at www.katonahclassicstage.com/privatelives

For press inquiries, please either email or call: