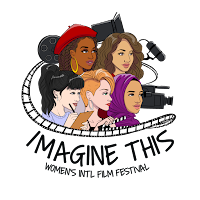 ​As New York City opens it's doors for Broadway, for filming and more, film festivals are also getting back to business and bustling with creativity. This year the Imagine This Women's International Film Festival is back with a slate of excellent films covering many different subjects. The 2021 Women's International Film Festival (ITWIFF) will be presented from Sept. 24 through Oct. 3, 2021, in New York. The womxn's film festival aims to amplify and empower independent and aspiring womxn filmmakers from around the world. The sixth annual film festival is being presented digitally with screenings, panels, and events from Sept. 24 to Oct. 3, 2021.
Tickets are available online at:
imaginethisprods.com.

​Imagine This Productions will host 163 films and 17 screenplays as finalists for the 2021  According to the press release, organizers received 700 Films from Womxn Filmmakers In 41 Countries — a Double-digit Increase over Submissions in 2019 and 2020 — Fueled by Pent-Up Demand during the Pandemic Lockdown.

“This year’s submissions explore the enormity of social inequity and unrest; the yearning for love and acceptance; the grief of loss and reckoning; and the aftermath of explosive events shaping womxn’s lives." said Festival Director Patrice Francois. “We see these filmmakers juxtapose contemporary complexities against familial pressure to honor traditional practices and societal constraints based on institutionalized privilege.”

​ITWIFF accepted films from womxn filmmakers and storytellers in leadership positions. Organizers founded the ITWIFF platform in 2016 to support womxn by sharing their work with the public, promoting equal opportunities for BIPOC womxn and the LGBTQIA+ community while providing educational and professional development, and serving as a resource information network.

“We congratulate this year’s finalists, who not only dug deep into their storytelling reserves to ensure a variety of lived experiences are memorialized but overcame obstacles presented by the COVID-19 lockdown,” said Development & Diversity Manager Susie Francois. “This slate can serve as a time capsule for this decade.”

​The roster of ITWIFF finalists includes submissions in animation, documentaries, short films, feature films and screenplays. A slate of 20 screeners deliberated over 700 entries to shortlist 174 finalists from 32 countries.

​The following is a selection of finalists featuring notable filmmakers and actors but please visit the website for updates and additions:

“How to Lose Everything: A Field Guide” by directors Christa Couture and Bekky O'Neil (Canada)
“Tumbling Towards Home” by director Imelda O'Reilly (Ireland)

“The 8th” by directors Aideen Kane, Lucy Kennedy, and Maeve O'Boyle (Ireland)
“An Ordinary Life” by directors Gili Danon and Efrat Shalom Danon (Israel)
“New Light - the Rijksmuseum and Slavery” by director Ida Does (The Netherlands)

​A synopsis of each finalist plus cast information is available at https://itwiff.sparqfest.live.

​The sixth annual film festival is being presented digitally with screenings, panels, and events from Sept. 24 to Oct. 3, 2021. Tickets are available online at imaginethisprods.com.

Imagine This Productions is dedicated to providing womxn storytellers and filmmakers a platform to encourage and develop creative projects by womxn. With Imagine This Women's International Film Festival and Girl Power Film + Media Summit, Imagine This aims to amplify and empower independent and aspiring womxn filmmakers from around the world. Imagine The goal is to support womxn by sharing their work with the public, promoting equal opportunities for BIPOC womxn and the LGBTQIA+ community while providing educational support and professional development, and serving as a resource information network. Learn more at imaginethisprods.com.