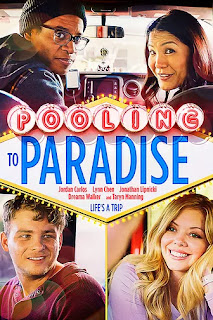 After the apocalyptic year - and - change the world has gone through, it’s fair to say we all deserve a little escapist fun. With theatres re-opening, cameras rolling, and the film industry getting back in full swing, what better way to end the summer than with a low-stakes, feel-good, tightly-written indie dramedy? Pooling to Paradise provides audiences with an enjoyable romp in an almost believable premise of three strangers and a driver in a pooled rideshare forgoing their trip to LAX and instead driving directly to Las Vegas. Instead of relying on boringly predictable road trip shenanigans— such as flat tires, hitchhikers, and traffic jams— Pooling to Paradise delivers a compact, character-heavy narrative that’s just as heartwarming as it is funny.

As with most indie films, Pooling lacks absurdly intricate set pieces, high profile actors, and studio-approved-family-friendly-watch-out-for-the-MPA dialogue. Instead, the film works within its limited budget to provide an intimate story with surprisingly great acting and realistic character interactions. Lynn Chen plays Jenny, a high-strung mom blogger who acts as our lead role and the resident “straight woman” of the hijinks. Our driver, Jordan Carlos’s Marc is a spiritual guide and a bonafide 5-star chauffeur (at least in his own mind). Our other passengers include Dreama Walker’s Kara, who turns the dumb blonde stereotype on its head, and the loveably obtuse Sean, played by Jonathan Lipnicki, who you may recognize from Stuart Little.

Each of these actors bring their own flair to their characters, improving upon what is already a well-written script. Little moments of blink-and-you-might-miss-it visual storytelling and humor are amplified by the energy of these actors, especially Carlos’s obvious knack for physical comedy.

Their conflicting personalities create an odd kind of chemistry— not one that flows smoothly, but oozes and bubbles in all the best ways. That said, disagreements and arguments are equally balanced with moments of surprising genuineness. While each character’s knack for monologuing eventually feels a bit gratuitous, it was again forgivable given the circumstances and other positive aspects of the movie.

If you’re not looking for it, you might miss the cleverness of Pooling to Paradise’s editing and cinematography. Pay attention to the disjointed, full-frame close-ups on each character when they first enter the car— they’re separate, private, enjoying their space: Mr. Robot style. But, when they start to open up to each other and develop a bond, they appear in the frame together, sharing the camera as they share their stories.

Note Kara’s facial expressions in the background of Jenny’s complaints, Marc’s power-pose before knocking on his “drug dealer's" door, the seeming impossibility for Jenny’s husband to take his eyes off his phone. Cinema nerds like myself can rejoice— Pooling to Paradise is full of subtleties that enhance the overall feel of the film. Also important to note is the creativity in animating Sean’s backstory monologue: the film could have perhaps benefited from even more of this kind of risk taking from director Roxy Shih.

Additionally notable is the fact that Pooling to Paradise is written by, directed by, and starring women. It is written by Caytha Jentis and a production of her company Fox Meadow Films (Bad Parents, The Other F Word, And Then Came Love) which is known for representing the under-represented. Director Roxy Shih, and star Lynn Chen (and equally impressive supporting actress Dreama Walker) headline this easy to watch indie and provide a fresh voice to the typically male-dominated indie film scene.

Equally important is the relatively diverse casting, with the two leads (Chen and Carlos) both being POC. While representation in film is thankfully growing (kudos to Nia DaCosta’s Candyman topping the box office during its debut), it’s fantastic to see a diverse film that doesn’t need to pander with any ham-fisted messaging and instead allows the narrative to speak for itself.

While I wasn’t particularly enamored by the ending (no spoilers, but it’s anticlimactic, even for a film of this subgenre), it didn’t ruin the film for me. Of course Pooling to Paradise is not without its flaws— some of the editing is choppy, an occasional monologue or scene drags for a few seconds too long, and the commentary on social issues feels underdeveloped— but this viewer only found that these elements added to the charm of the movie. 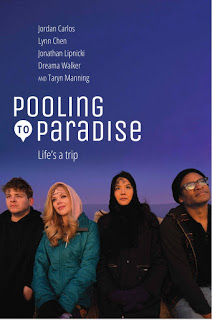 Pooling to Paradise is an indie film through and through, and a successful one at that. The self-aware humor, clever moments of dialogue, and undeniably feel-good plot create a storyworld and cast of characters perfect to dive into for 90 entertaining minutes. For those mindful, be aware of a psilocybin reference as well as a slightly problematic suicide joke towards the end of the film.

For Info on Where to See This Film/Where it is Streaming: