The Wrong Missy is just the RIGHT Movie to Watch Now: Happy Madison Productions Gives us More of what They're Famous For 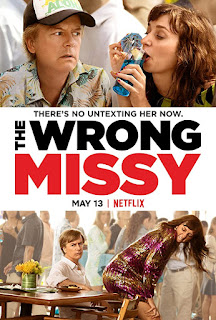 What can I say about the new Netflix flick The Wrong Missy?

I stumbled upon it one night when it showed up as the number one most viewed movie on Netflix, which was a few days after it's 5-13 release. Seeing it was a Happy Madison Production, and as I am a big Adam Sandler fan (which some people may not admit to) I watched it.

Let me say that about one quarter of the way through I almost turned it off because the crudeness was over the top (I kept saying, this was written by a man for sure). But  I kept on watching like someone would a car wreck just to see what was going on.

Well, I am glad I continued to watch. As I said, I am a fan of almost anything Adam Sandler has a hand in. That means I am used to cringing due to the vulgarities, language and body part humor as well as the  nonsensical but clever dialogue often found in them. (There is one song about body parts, I must add, that was over the top even for an HM movie as well as one other scene that is not without controversy.)

And of course, I can find all the usual suspects in his movies from Rob Schneider to Nick Swardson to Nick Farley (Chris' brother) and even to Mrs. Jackie Sandler, who I may add, was rocking her bikinis. Adam always takes care of his friends. (I saw him recently in AC, and Rob was his surprise special guest). Phone, wallet, keys, laptop forever but I digress.


The plot was  a simple one and yet pretty unique. I am surprised it had not been done before - unless I just haven't seen it. Tim Ross, a mild-mannered, boring and quite sedate yet successful business professional played prefectly by David Spade, meets two women named Melissa. Missy #1 was set up by his grandma for a blind date. She  is the definition of a bad date, played impeccably by Lauren Lapkus. She does and says all the wrong things. Melissa #2 is a normal, former Beauty Queen, played by Molly Sims that he meets in an airport. 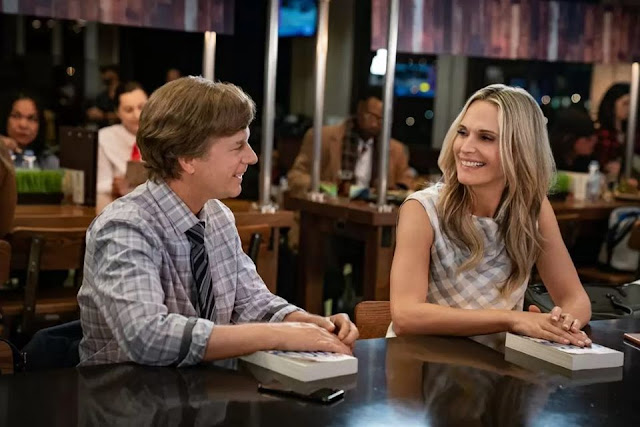 By accident, Tim starts a texting relationship with THE WRONG MISSY on his phone. He then invites Melissa #2 to accompany him on his business conference to Hawaii but Melissa #1 shows up to his complete and total dismay. Missy # 1 is so bad it's often hard to watch her. She's like Larry David on steroids.

What made it more interesting was setting it in a tropical location, in this case Hawaii (like in 50 First Dates)  giving us something interesting to look at and of course with his budget giving everyone involved a really nice location/vacation shoot.

I don't want to give away any spoilers, but really I don't need to because you can figure out what the ending is as soon as you see Missy arrive on the plane. But, the journey to get there is quite quirky and there are some really, really funny moments. I have to say I LOL'd several times. One of them was when Missy falls off a cliff like a plastic Barbie Doll hitting every rock on the way down. Hard to describe, you gotta see it. It's one of the funniest falls I've seen in quite some time.  Of course, one should not laugh when someone falls off a cliff but if you know HM productions, it's not real, and it's not meant to be. 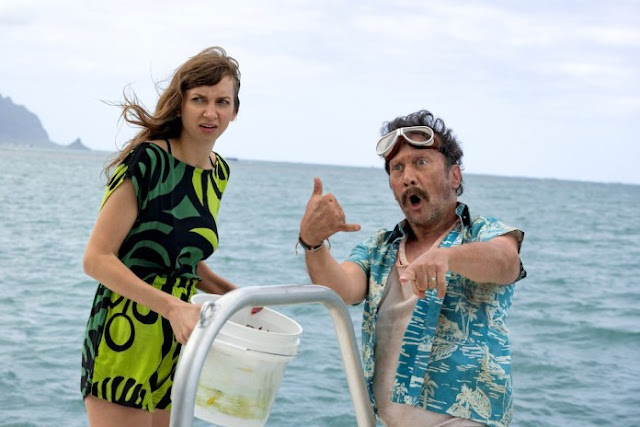 And then there's the hurling noises by Tim Ross's boss (played by Geoff Pierson) whenever he hears a certain word. (Again, almost embarrassed to say I liked that but I am laughing now just thinking about it). I can't imagine what the audition for that part sounded like.

I also liked the backdrop of  Hawaii (like in 50 First Dates) Dates  giving us something interesting to look at, adding to the antics and of course with his budget giving everyone involved a really nice location/vacation shoot.

Sarah Chalke from Scrubs is also in this, she plays Tim's ex-fiance. She has not aged a day.

Happy Madison Productions, thanks for getting me to laugh and forget all about the creepy virus that taken over the world for an hour and a half. After watching The Wrong Missy you may get up from the couch thinking you just wasted some valuable time but you didn't, "Happy" is just what it makes you.
Email ThisBlogThis!Share to TwitterShare to FacebookShare to Pinterest
Newer Post Older Post Home