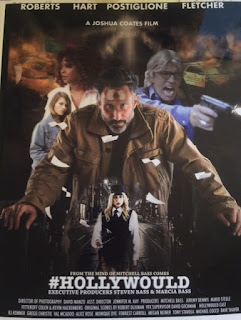 Independent film is alive and well. It seems every week there's a new film festival popping up, and at these festivals one can find a plethora of new movies, in every genre available. I had the pleasure of meeting writer/director Joshua Coates at the Ridgewood Guild International Film Festival in picturesque Ridgewood NJ at the premiere of his latest film, Hollywould. Flanking the Red Carpet with him were not just the actors, including Eric Roberts, Torrei Hart, Pete Postiglione and Caithlyn Fletcher, but also most of the crew and his family. Everyone was there to support this filmmaker who has a knack for making films that keep you at the edge of your seat.

BTS: So tell me Joshua, how did this film get started?

Joshua Coates: The Story of Hollywould was inspired from the ideas and writings of Mitchell Bass who pitched the idea to me. I thought the concept was amazing and soon after that Mitchell and I met for weeks developing the outline for the story. It took me about 2 weeks to write the screenplay, Mitchell was blown away with the first draft and soon after that he secured funding from the Executive Producers Steven and Marcia Bass to green-light the Production.

BTS: Without giving too much away, what's Hollywould about?

Joshua Coates: Mark Travis (Pete Postiglione) an award winning writer seeks inspiration by traveling to his hometown. What he finds in his search is not what he expects. Her name is Holly (Caitlyn Fletcher). What Holly would do is like nothing he has ever experienced. Holly brings about in the mind of Mark a storm of chaos and confusion that would push him to the edge making him do things he never thought he would do. Mark finds himself on a ride he cannot escape, a train ride destined to crash.

BTS: What is Eric Robert's role?

Joshua Coates: To make matters worse there is Detective Leon Davenport (Eric Roberts) who is set to retire after 30 years on the police force but before he can do so, the reemergence of a foe from the past returns known as Vienna. Mark and Davenport will find their worlds intertwined as they each deal with their demons from the past.

BTS: So this film was not shot in Hollywood- but actually Delaware County in Pennsylvania. How was the onset camraderie?

Joshua Coates: The Cast and crew was amazing, especially Pete Postiglione, a native of Delaware County, Pete Postiglione and Eric Roberts made magic on screen, you can tell they both were having fun and it shows.

The amazing Torrei Hart brings a light comedy to the film but stays true to her character. Caitlyn Fletcher who is a New Jersey Native comes to life on screen as Holly, a great actress who will leave her mark on this film.  RJ Konner as the conductor is a remarkable actor who presence is felt very early on in the film; you know something is odd about his encounter with Pete Postiglione’s character.

BTS: Tell me about behind the scenes.

Joshua Coates: Most important was my amazing production team. The Director of Photography Dave Manzo he and I connected to really present the story I had envisioned. Jennifer M. Kay my Assistant Director was so vital to the success of the film, Val Mcadoo as producer came through in clutch moments Jeremy Dennis was really the back bone to the production as well as Veronica Rivera, Geena Shaw, Maurice Mccallum and Derek Sands.

BTS: Your premiere night at the Ridgewood Guild International Film Festival was amazing, and the after party even better.

Joshua Coates: I am very blessed to again debut a film that I have written directed and Produced at the RGIFF, the Ridgewood Guild has been very supportive of my film career for a number of years, truly grateful for this
platform.

Hollywould will be showing in theaters in the Philadelphia area beginning October 16, 2019 and multiple platforms in the future.
For updates: