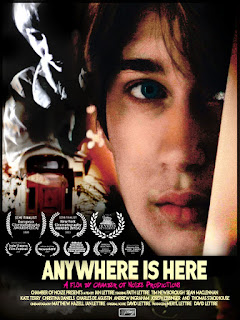 In this interview I talk to Ian Lettire of NJ, a Rutgers grad who straight out of Mason Gross School of the Arts hit the festival circuit with his first feature, Anywhere is Here and already has it streaming on Amazon. As making a feature film is a daunting task, read how he had the help of his family and community to create this movie, and learn some words of wisdom for other film students.

BehindtheScenezz: What is this film about and where did you get the idea for it?

Ian Lettire: Anywhere Is Here is about Sarah Dawson, a teenaged girl, who endures life at the hands of an abusive father and a neglectful mother. Seeing no other option, Sarah devises a plan to steal her father's money and run away with her best friend Ben. Unfortunately, things go terribly awry, and Sarah is unwittingly thrown into a nefarious world of white - collar crime. Sarah stands at a crossroads where she must decide to flee or take over her father’s business. If Sarah is to navigate the tangled web of corruption her father has spun she will need to dig deep and find the inner strength she never knew existed.


This story came about after I made a ten-minute short film called  Anywhere But Here for a class project sophomore year in college. After the film was completed and I showed it to my family we were very happy with how it came out. We talked it over and came to the conclusion that if we could make a ten-minute short film, why couldn’t we make a full movie? So we decided to use the first ten minutes as the inciting incident for a larger story and wrote the film in parts, almost like a TV show. We then shot each portion every semester and I used those separate parts to meet the requirements for my classes since each semester I had to make a short film. When the sections were completed I edited them together to form the full film.


BehindtheScenezz: I hear that this was a real collaboration with your family. Film is such a collaborative medium, what was it like working with people you know so well?

Ian Lettire:  Working with my family has been a tremendous experience and an amazing support system. It allowed me to tackle such an enormous undertaking. Creating a feature film by oneself seems like an impossible task, but with my family and friends behind me I was able to assign tasks to everyone so I could focus on directing.

My sister acted and was in charge of props, my mother was the executive producer; my close friend Matthew Hazell was the director of photography, my father acted and co-wrote and our family friends pitched in by providing locations acting and working equipment. This took a lot of the pressure off of me and made the task doable. Without them I would not have been able to bring this project to life. At times it got stressful as my family can be argumentative and we had different artistic views, but these problems subsided quickly when crunch time rolled around and we needed to start filming. Ultimately my family pushed me to create such a project and facilitated its success.

BehindtheScenezz: Ian, so thrilled to hear that a fellow Rutgers/Mason Gross student is having success in the world of film. What were some of the things you learned at RU that really helped you?

Ian Lettire: I learned a lot at Rutgers. Their approach to filmmaking is very hands on and freeing. They put cameras in your hands the first semester and set you loose to create with little constraints on subject matter. Because of this I was able to get the experience I needed quickly and learn at my own pace. I think that the program at Rutgers allows you to get what you put into it. If you are willing to work hard you have the tools at your disposal and the freedom to create a lot of great content.

Having consistent access to professional equipment was how I was able to create this project on such a low budget. Because of this I think the most important thing I learned was how to be a tenacious filmmaker and consistently produce content. Beyond that the directing, writing, cinematography, and editing classed were a great help in honing my skills. The faculty really cared about giving me the tools to be a better filmmaker, even though I did not always agree with their artistic sensibilities.


"Take advantage of the resources you have at your disposal and don’t wait to create. - Ian Lettire

BehindtheScenezz: Think back to when you decided you wanted to study film at college. What advice would you give to a film student just entering Mason Gross, or any other film school?

Ian Lettire:  There are a few pieces of advice I would give to film students. First I would say take advantage of the resources you have at your disposal and don’t wait to create. Take a hard look around and make a list of the things you have that could facilitate an interesting production. Ask yourself; what places in your hometown are cinematic, what friends have interesting personalities, or look good on camera, who do you know that could work equipment, etc. Everyone has people/things in their life that, if you utilize properly, will help you create a film on a small budget.

Secondly I would say learn as much as you can from your superiors/teachers but also hold true to your artistic sensibilities. In film school everyone has different taste in film, even your professors. A lot of times other classmates or professors will give you constructive criticism on your work, which is great, but its important to know that not all criticism/advice is right for you. You should know what you want to create first, because ultimately that film will be your stamp, so while you should always be using others advice to improve your work, if you disagree with the artistic direction that someone wants you to take, stick to your gut and make the film you want to.

Finally I would say work on other people’s projects and treat everyone with respect. As a student in film school you will constantly need crew and cast members. Luckily Rutgers is a big school and there are a lot of things going on so you’ll meet tons of people who you can enlist. If you treat people right and help them with their projects it will be much easier to get people to work on yours and ultimately facilitate your success.

BehindtheScenezz: What are you up to next?

Ian Lettire:  Right now we are in post-production of a short film about a washed up country singer called Too Damn Long and we are finishing a few scripts.

What Ian will Binge on:
Either something intense like Breaking Bad or Game of Thrones
or something funny/relaxing like The Office or Bob’s Burgers.

Ian's Place of Inspiration
The most inspiring place for me in New Jersey is Holland Township and my hometown. The landscape is beautiful there and I was able to use a lot of different places nearby to make the film while maintaining a home base of operation.