Review of My Very Own British Invasion at the Paper Mill Playhouse in NJ: You're Into Something Good! - Peter Noone's Musical will have you Rockin' and Rollin' 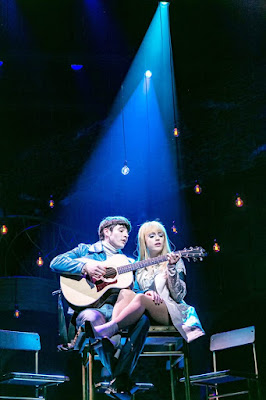 Brexit be damned!  The U.K. is rockin’ Paper Mill Playhouse in Millburn, New Jersey with the world premiere of  My Very Own British Invasion now through March 3.  Created by the real life Peter Noone, “Herman” of “Herman’s Hermits”, it is the stylized story of the British rockers who took the U.S.A. by storm.  Sixteen year old Peter manages to talk his way into The Bag O’ Nails, a pub and popular hangout where The Beatles, The Rolling Stones, The Animals and other emerging superstars of early rock and roll got their start.  It’s 1964-- Ed Sullivan, LP Albums, go-go boots and flippy hairdos are everywhere.  Here at home AM radios are tuned to Cousin Brucie and we can’t get enough of Twiggy in her mod Mary Quant fashions.
Enter Peter (Jonny Amies, making his professional theatrical debut), right out of central casting looking every bit the adorable shaggy English boy.  Think H.R. Pufnstuf crossed with Davy Jones* and you get the picture.   Good Boy Peter falls hard for Pamela (Erika
Olson off of the First National Tour of Beautiful), girlfriend of Bad Boy Trip (Conor Ryan) channeling Mick Jagger. This age old story of boy-meets-girl-loses-girl-gets-recording-gig provides the perfect backdrop for some of the decade’s greatest hits.  Kyle Taylor Parker (original cast Kinky Boots and Charlie and The Chocolate Factory) plays Geno, who serves the dual purpose of pub MC and stage narrator. 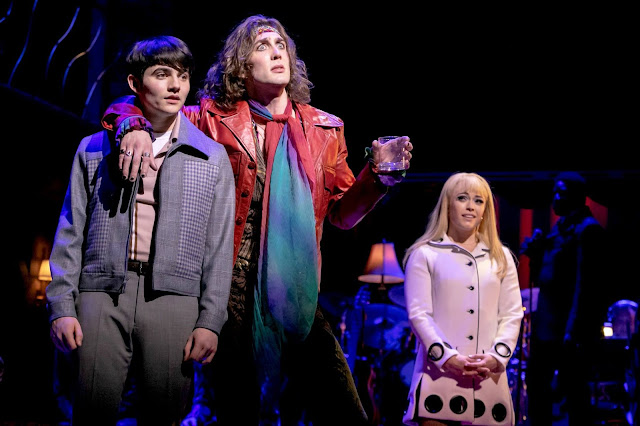 The hit parade of sing-along favorites including “I’m Into Something Good”, “Mrs. Brown, You’ve Got A Lovely Daughter”, and “Can’t You Hear My Heartbeat” however is just the prelude for the show stopping “House Of The Rising Sun”.  Addicted to pills and struggling to make it big, Pamela reaches rock bottom in New Orleans.  It is then that Parker and Olson give all and deliver a soulful, heartbreaking and powerful performance.  If you don’t already have tickets to see My Very Own British Invasion , this is the reason to get them now.
The staging is cool and by that I mean masterful.  By the end of Act I the usually quiet and respectful Paper Mill audience is transported to the front row of a concert with hundreds of other bubbly teenagers , shouting the refrain “I’m Henry the Eighth, I Am”.  It’s all the more realistic that the orchestra is out of the pit and on stage for the entire show acting as the  back up bands.  While the woman next to me was dancing in her seat, I was digging the on stage special effects including a slo-mo rendition of “For Your Love” and a bouncy “Time Of The Season” performed on what you can only believe is an actual trampoline. 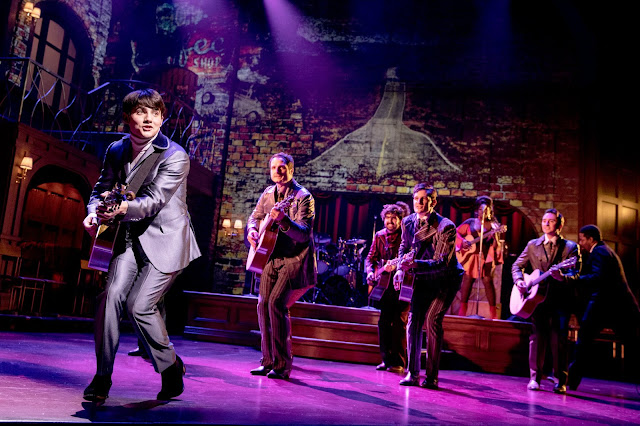 Amies eventually moves beyond bubble gum and showcases his voice in  the high energy “We Gotta Get Out Of This Place” followed by the sweet “There’s a Kind of Hush (All Over The World)“ in a duet with Olson.  Fans who remember the 60’s and fans just discovering them can look forward to hearing more than thirty of their favorite songs.  My Very Own British Invasion is a trip back to the decade which defined groovy in spite of everything.  Times were changing. Only briefly does Geno remind us that this musical revolution took place in the shadow of war, segregation, and assassinations.  Yet the best of that era- the music- remains. 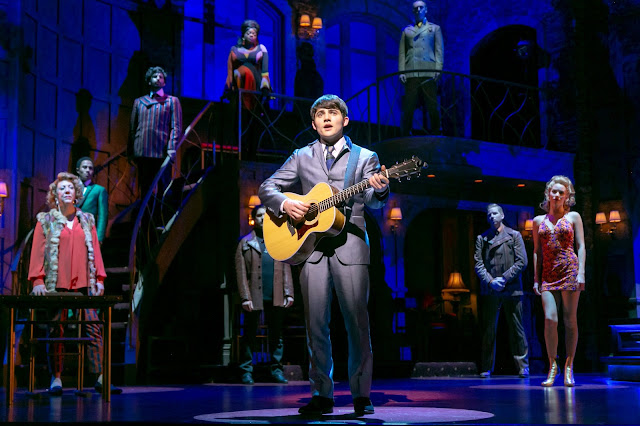 As an added bonus that night,  Peter Noone was in the audience with his wife and daughter, sitting just a few rows in front of me.  (Yes, he is still boyishly cute!) I’m sure he is proud of these actors who do justice to his legacy.  What more do you need?  Don’t be a drag and miss your chance to see this fun-filled show.  Peace and love.
*remember when he went to Prom with Marcia Brady??!