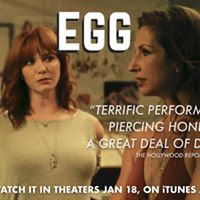 Marianna Palka’s EGG is a biting dramedy starring the beautifully-acted Tina (Alysia Reiner) and Karen (Christina Hendricks) as old art school friends meeting for dinner after years apart. Tina, shocked that Karen is in the final months of pregnancy with her husband, Don (David Alan Basche), eventually reveals that her and her own husband, Wayne (Gbenga Akinnagbe) are having a baby via surrogate mother, Kiki (Anna Camp). Conflict immediately ensues, though that’s foreshadowed from the beginning: Tina and Wayne live in a run-down neighborhood, which wealthy developer Don scoffs at, while Tina asks her husband how she looks in an elegant dress clearly designed to compete with Karen before she even arrives. The characters argue almost like stock sitcom characters: Tina and Wayne are the liberal couple who are having a child via surrogate to subvert gender roles, while Karen and Don are a typical white suburban couple who wax on about the joys of pregnancy.

Yet the sitcom-like situation escalates into something darker as the film goes on. All four characters are selfish, deeply flawed people: Tina is blatantly insensitive to Karen especially, and treats every pregnant woman like she’s a mindless victim of the patriarchy, while Karen is superior and condescending in her pregnancy, Don is smug and sneaks glances at the younger, conventionally attractive Kiki, and underneath Wayne’s generosity lies a hidden selfishness and anger directed at Tina. This isn’t a criticism: it’s refreshing to see such flawed characters be so caustically funny, too, as they bumble through conversation after conversation about pregnancy. 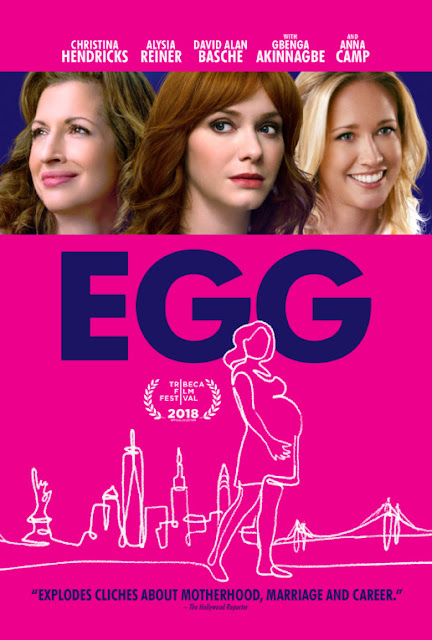 Unfolding over the course of one day, the characters’ drama at times feels simplified—Wayne’s last-minute argument with Tina towards the end is a bit out of character, but EGG is still singular in how intensely it focuses on motherhood and parenting, and the bold questions it raises about the desire (or lack of desire) to have a child. Unlike other media, EGG depicts motherhood and childrearing as fraught and complicated, and Tina and Karen especially have honest conversations about what it means to have and raise a person. Their faded friendship and complicated present bond is the movie’s heart.  Rightfully so: neither Wayne nor Don are partners to Tina and Karen in the ways they need them to be, and Karen and Tina are the ones with history. Tina and Karen make the effort to see beyond each other’s superficial posturing in some truly lovely moments of female friendship: they’re imperfect people, but together they listen to each other as they speak of their deepest fears and insecurities. 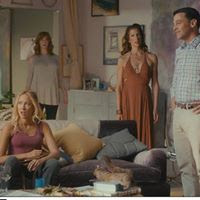 Unfortunately for Tina and Karen, Don and Wayne never go beyond their surface-level impressions of each other, or even of their own wives. “She’s looked better,” Don tells Kiki while talking about Karen, not even looking at his wife, while Wayne complains to Tina that she lacks “a fundamental feminine instinct: nurturing.” It’s no coincidence that both men are more relaxed around and attracted to Kiki, who’s a stereotypically ditzy blonde girl by design, a foil to the real, complex women in Don and Wayne’s lives.

The men eagerly listen to their fantasy of what they think a woman should be while Karen and Tina share commiserating glances. “I mean, people never have sympathy for men,” Kiki insists in the middle of defending the married man she’s in love with, while Don nods encouragingly and Tina and Karen exchange exasperated looks in one of the funniest satirical moments in the movie. In any case, EGG isn’t invested in Don and Wayne’s fantasies: this is a movie that focuses on Tina and Karen’s glances, on how women view themselves and each other, and how that impacts their relationships. EGG is complicated, frustrating in that complexity and funny, just like its female characters.

Tellingly, EGG doesn’t end with an ecstatic birth or blissful parenting: it ends with Tina, successful but alone, watching Wayne and their baby at a distance. Tina glances away, grieving but moving on. She isn’t transformed by the mythical power of motherhood, and we don’t
believe Karen in her final scene, where she insists that she’s happy with a man who’s likely cheating on her. We do, however, believe the moment when Karen gets up to leave, and hugs Tina.


EGG doesn’t answer the questions it raises about motherhood or pregnancy, but it does allow two prospective mothers to ask those thorny questions. Most importantly, EGG makes those questions worth asking, and leaves it to us to parse out answers.