MOVIE REVIEW: Angie Thomas' The Hate U Give is A Must-Watch - Masterfully Created and Acted, Personal and Human - A Story to Make Us Think, and Maybe Act 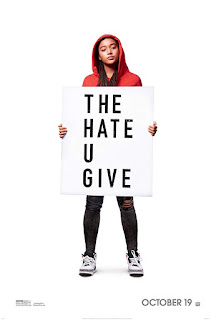 "This movie is masterfully crafted and acted, and more than that, it tells the story of a teenage girl, in all of her messiness, in all of her humanity, and the journey she undergoes to find her voice and use it. The Hate U give is personal."

When you hear the words “movie adapted from a YA novel,” certain tropes and images may spring to mind: dazzlingly attractive 25 year-olds playing teenagers, a vaguely evil futuristic dystopia that demands conformity above all else, a special white girl rebelling against the dystopia with a ragtag group of freedom fighters.

Here’s the plot of Angie Thomas’s The Hate U Give, adapted into the movie directed by George Tillman: Teenage Starr Carter is the only witness in her childhood best friend Khalil’s murder at the hands of a police officer, and she has to decide whether to testify on his behalf in the trial to come. Here’s the first scene in The Hate U Give: when they were little kids, Starr’s father, played with fierce love by Russell Hornsby, gives Starr (Amandla Stenberg), her older brother Seven (Lamar Johnson) and her little brother Sekani (TJ Wright) The Talk black families give to their children on what to do when an officer approaches you or pulls you over. “Put your hands on the dashboard,” Maverick tells his wide-eyed children, “Don’t make any sudden moves.” 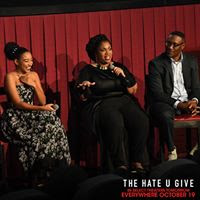 It is heartbreaking and painfully mundane to witness: this is just another day for the Carter family. George Tillman’s The Hate U Give is something new. Something different. This is a YA book-to-movie adaptation anchored firmly in our present, everyday dystopia, and it is all the more powerful for it. Teasers for Avengers: Endgame may have just dropped, but this is the superhero origin story we need.

Amandla Stenberg stars as Starr Carter, a teen straddling two worlds: the poor black neighborhood of Garden Heights where she lives, and the wealthy white prep school she attends, Williamson. Cinematographer Mihai Malaimare Jr. smartly contrasts Starr’s different environments visually—Garden Heights is cast in a warm, comforting glow despite the poverty and threats from Anthony Mackie’s menacing gang leader, King, while Williamson Prep is defined by its icy, apathetic color palette despite its academic successes. Starr keeps her head down at school, doing her best not to appear “too ghetto.”

She laughs politely when her white friends use black slang to look cool, but she feels uncomfortable at the house party her friend invites her to in Garden Heights, too. Starr feels like she doesn’t really belong anywhere, and then she sees Khalil, played beautifully by Algee Smith, and something in her lightens. This was the boy who played dress-up-Harry Potter with her when they were kids. This was the boy with adorable dimples. The two reconnect instantly, but the party gets broken up by gunshots: Khalil, ever the gentleman, insists on driving Starr home.

In another movie, this would be the start of a romance. Khalil and Starr’s banter is easy and lived-in, though Khalil admits that he’s been selling drugs to pay for his ailing grandmother’s medication, and Starr feels guilty about their friendship fading as she started attending Williamson. Still, sparks crackle in the air when they kiss, even when Starr stops to say, “I have a boyfriend.” Khalil gives her a slow, playful, earnest smile. “It’s ok,” he tells her. “We’ve got time.”

A police car stops them. The comfortable quiet disappears. The tension is built masterfully—Starr knows what to do when a police pulls her over, but Khalil doesn’t. He doesn’t threaten the officer, he doesn’t have any weapons on him. Khalil is just a little mouthy, like plenty of teenagers are. When the young, white police officer is scribbling down Khalil’s information, assuming that Khalil has drugs on him, assuming that Khalil is a threat, Khalil smiles at Starr. He never looks away from her. He reaches into the car—“Khalil, stop!” Starr says—and Khalil pulls out a hairbrush. He smiles. He has adorable dimples.

Starr watches her childhood best friend get shot and killed.

The entire theater didn’t breathe. People in the audience muffled sobs at Khalil’s funeral.
In a voice over, which the movie usually deploys organically, though occasionally they get too expositional, Starr tells us, “I always said that if anything happened, I would speak up. Now that it’s happened to me, I’m silent.”

In her grief, in her anger, enveloped in the love of her family, Starr finds her voice. She stops excusing her Williamson friends’ casual racism. She stops being afraid of King and his cool threats. Stenberg plays Starr’s quiet with subtlety and nuance, and she plays her outspoken cry for justice with power and complexity. Starr may become a hero to her community, helped by a local activist played by Issa Rae, but she’s still a teen; she’s never simple and she’s never stereotyped. 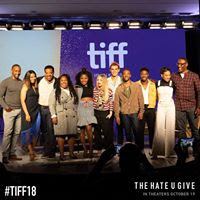 Starr’s family provides some of the biggest laughs and the most poignant moments in the film—there’s a scene with Starr and her police-officer-uncle, played by Common, that is complicated and difficult, and another scene where Starr introduces her boyfriend (KJ Apa) to her dad, where he assumed that her boyfriend is her valet and not her date. “Give him a tip,” Mav tells his daughter while her boyfriend stands there awkwardly, and the audience burst out laughing when Starr rolls her eyes and delivers the classic exasperated cry of, “Dad!” Garden Heights is complicated, but it is always bathed in that warm glow, and it is always home.

The Hate U Give isn’t a cash-grab meant to exploit our current moment of reckoning with police brutality. This movie is masterfully crafted and acted, and more than that, it tells the story of a teenage girl, in all of her messiness, in all of her humanity, and the journey she undergoes to find her voice and use it. The Hate U give is personal. It is made with care and attention and skill. It is an incredible movie and coming of age story that perfectly captures what YA dystopian movies often struggle to get at. 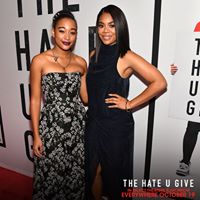 A young black girl raises her voice, and the government doesn’t fall to its knees, but Starr’s world is changed for the better. Starr shines with the light her dad named her for. There’s no scene where the characters decide to end this system for good, where society is reborn into something better. None of us are there yet. We are all still here in the long, long struggle, living and loving and hurting in our present-day dystopia. The Hate U Give doesn’t give us an easy, feel-good way out. The world isn’t saved yet. Instead, the film offers the microphone, or silence with which to listen, or a canister of tear gas, or a poster, or a t-shirt, anything, and asks us to take it.

All photos from The Hate u Give Facebook unless otherwise specified.