Actor Interview: Adrianna Hicks and Carrie Compere of Paper Mill Playhouse's The Color Purple Dish About Their Roles in this Iconic Story 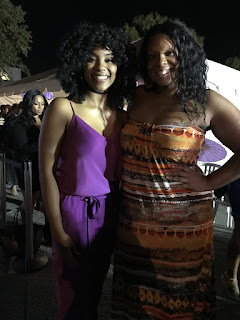 After the stunning opening night performance of “The Color Purple” at Paper Mill Playhouse in Millburn, New Jersey, I had a chance to informally chat with Adrianna Hicks (Celie) and Carrie Compere (Sofia) at the after party between photo shoots.  In sharp contrast to Celie, who must spend hours in make-up and wardrobe to look so shabby and downtrodden, Adrianna (in a fabu purple jumpsuit) is beautiful and radiant.  Carrie is just gorgeous and as sparkling as her character Sofia. Both Adrianna and Carrie were authentic and forthcoming and I thank them for taking time to talk to me before they even had a chance to get some dinner.

What was the first performance you saw that inspired you to pursue theater?

Adrianna:  I saw a high school production of “Guys and Dolls” and I just knew.  We cannot underestimate the power and importance of the arts in school.

Carrie: I never considered a career in theater until I saw “Betsey Brown” at McCarter Theater in Princeton.  It was an all-black cast and I saw myself on stage.


How do you prepare for the strong roles of Celie and Sofia?

Adrianna and Carrie:  (answering in unison) From God! 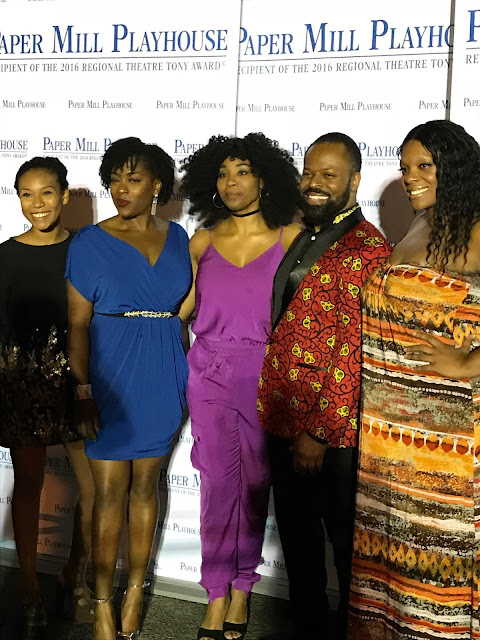 After you give so much to your performance, how do you relax and unwind?

Adrianna and Carrie:  (again in unison and without hesitation) Netflix!

Adrianna:  I love “Jane the Virgin” it is so funny.  I’m also watching “Maniac” with Emma Stone.
Carrie:  I just finished watching “The Money Pit” with Tom Hanks.  A friend recommended it.

[Note: Adrianna and Carrie were gracious as we were interrupted for more publicity shots. Eventually I caught up with them again as they joined the very end of the buffet line.  I love them even more when I saw they headed straight to the pasta.  I followed.]