From the Big Screen to the Big Apple: Sex and the City's Cynthia Nixon Campaigns for Governor of New York in NYC's Meatpacking District 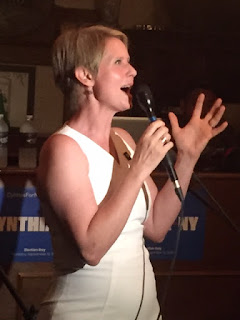 At many points in history there has been a crossover between Hollywood and politics. Now there's a popular female entertainer entering the realm of politics, and it's almost surreal. Cynthia Nixon was well-known as a die-hard New Yorker in the Sex and the City series and movies, an intelligent, driven professional and mother who cared about the city and it's people. Though that was scripted, upon meeting Cynthia at a recent campaign event for her quest for the Democratic Gubernatorial position on the ballot in New York State, one could say that much of what she spoke from her own script could have been coming from the character she played.

In real life, Cynthia Nixon is also a strong, determined woman who wants to make a difference in the world. I kept remembering one episode of Sex and the City when she was fighting to be heard as a women attorney at a board table of mostly men. This was the same person here tonight. VIdeo: 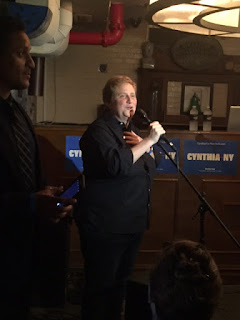 Cynthia is  married to  Christine Marinoni, who spoke at the event about her wife and New York. Cynthia made it a point to say that she rides the subway often with her kids, emphasizing the point that she is a real person not the character she plays on TV. She's a propoent for many progressive themes, fairer education, minority rights and issues, improved public transportation, rent contol, healthcare and more. Watch the video for more or visit her campaign, 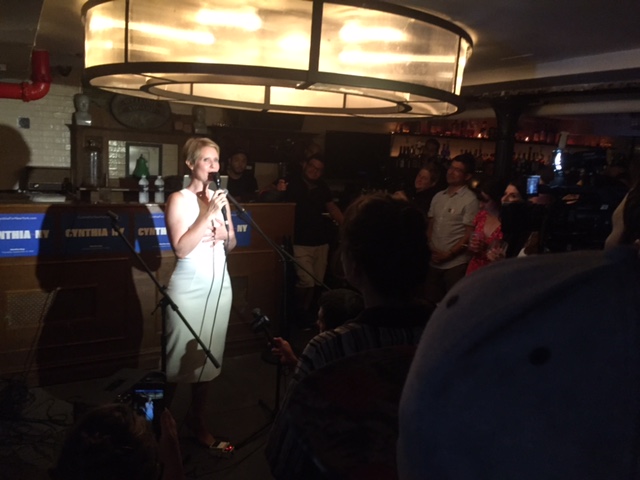 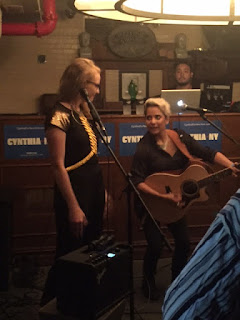 The event started with some music being played by a female duo both of whom were actors on Orange is the New Black. After a few speeches by supporters Cynthia took the stage and confidently got her messages and her platform across to the receptive audience. Shouts of Si se Puede were heard often.

After she left the stage she took the time to answer questions and pose for photos with supporters.

It takes guts and courage to go up against an incumbent, especially as a female. For more on her campaign visit:
https://cynthiafornewyork.com/commit/


Article by Suzanne Ordas Curry
Email ThisBlogThis!Share to TwitterShare to FacebookShare to Pinterest