Interview: Writer/Director Caytha Jentis' Series The Other F Word Gets Picked up on The Girlfriend Platform: This Sex nd the City-ish Comedy About Life Over 40 stars Judy Gold, Steve Guttenberg 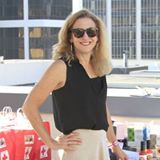 Caytha Jentis is a filmmaker, a writer, director and overall creative person who just never stops thinking, dreaming, doing and forging ahead. Prior to her latest project, The Other F Word, she wrote and directed three feature-length movies, Bad Parents, The One and Then Came Love. She was recently named to Good Housekeeping Inspiring Women to 50.

Her latest venture, or rather adventure, was creating The Other F Word, a series about life after 40. Use your imagination but the "F" can mean anything, and after the show started airing, she realized from viewers that the F can mean forty, fifty, fun, fearless, and more.


The problem, she found, was convincing the powers that be in Hollwyood that programming for the over 40 crowd can be lucrative and successful. After a succesful run on Amazon, and having been an Amazon Video Direct Star for several months when the show debuted it's first season, The Other F Word has found a new home, on an platform called The Girlfriend by AARP. This is a new website with content especially for the vibrant and growing female market over 40. 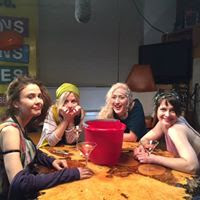 I found that turning 50 and having my kids get older was an intense period of dramatic transition for me and my friends.  It seemed that there were shows about women friendships at many of the life milestones and none yet that addressed this chapter of life.  As there are so many people on the web talking about this time of life, it seemed that doing the show digitally was a great way to tell the story honestly and get it directly to our audience
Why do you think this is still an unrecognized market?

Sadly ageism exists in Hollywood and Advertising and there are a lot of myths that need to be dispelled.
What did you learn from your past movies
that you used in this series?

As an independent filmmaker I know how to wear many hats a stretch and dollar and as my films have all been targeted to 'niche' audiences, I have an understanding of viral marketing and that it's no longer produce it and they will come.
What do you think of the Internet now as a place
to showcase new projects?

The internet is the new platform for fresh voices and independent projects whether long form or short or episodic.   It provides a platform for storytellers to get their stories to audiences. That said, there is too much content out there and people's times are that much limited that it's harder than ever to succeed.
Why a series and not another movie?

I felt the four women's stories lent themselves better to an open episodic story vs a finite story of a feature.   Each character has a coming of age journey - similar to the young ladies in girls - complete with its own fits and starts that needs the time to unfold.
Related - Interview with star of The Other F Word Star Stephanie Little:
https://www.suzeebehindthescenes.com/2017/05/interview-meet-stephanie-little-from.html

Tell me about some of the subject matter
you want to focus on in this series.

I don't want to give away too much about each character's story but Itried to start to pull the rug out from each of their comfort zones as life tends to do.   Why is humor so important?  i write absurdist reality based comedy.  I've been inspired by the existentialist whose world view was that we are ultimately all born to die - so you can either become depressed or find humor in it.
To Watch The Other F Word Streaming FREE
on your device visit:

https://www.thegirlfriend.com/
Email ThisBlogThis!Share to TwitterShare to FacebookShare to Pinterest