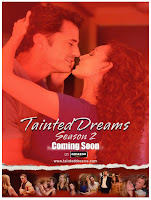 (Press Release) New York City - December 2017 - Romance, intrigue, manipulation…and a little bit of humor.  Just a taste of what’s to come as the Second Season of the Emmy-nominated series Tainted Dreams kicks off and fans finally get resolution from Season One's gripping cliffhanger. Beginning December 21st, the next chapter of Sonia Blangiardo's Tainted Dreams, the soap behind a soap, will be available for streaming on Amazon and Amazon Prime. This series, which was nominated for five 2017 Daytime Emmys, follows the behind-the-scenes drama of a fictitious soap opera titled Painted Dreams and features a very unique cast composed of classic soap opera fan favorites, reality personalities and stage stars.
Creator and Executive Producer, Sonia Blangiardo has served as a producer/director on five iconic soaps, including All My Children, One Life to Live, As the World Turns, General Hospital, and currently Days of Our Lives. The show is based on the real-life dramedy she has lived and seen both on and off screen in her 25 years in soaps.  Visit www.tainteddreams.com for more info.

Blangiardo says she is "excited to take everyone along these characters' journeys in Season 2, as they evolve and deal with ever increasing professional and personal turmoil."


You may like: A Behind the Scenes Look at Tainted Dreams:
http://www.suzeebehindthescenes.com/2014/01/interview-behind-scenes-look-at-soap.html