Special Screenings for Wall Street Thriller Equity To Be Held in NYC and NJ this Month: Q & A's with Actors, Producers Held After Shows

As part of the marketing of this film, panel discussions and Q & A's are being held throughout the country on the making of the movie and about females in the workplace. 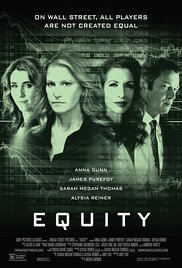 
Suzanne Curry, Co-producer states, "This is an intelligent movie. The film was written, produced by, directed by and stars mostly females. It is the first female-driven Wall Street movie but is not a chick-flick by any means. For independent film, this  shows that anything is possible, and for women in entertainment, it 's a message that female - drive entertainment is marketable and profitable."'

For more information and a list of theaters to find it in:  http://sonyclassics.com/equity/